Winter 5k Handicap: Rebecca Hannah took 3 minutes 8 seconds off her previous time to bring off a fine win in the Joggers’ virtual 5k February Winter Handicap. She clocked 33:18, which is her best 5k time in club races since May 2020. She was closely followed by Bridget Wallwin, who beat her previous time in January by 2:57, recording an all-time 5k PB of 27:41. Claiming third place was Pearl Fay in a time of 34:18, 2:10 inside last month’s time and her best 5k performance since a parkrun early in 2020. 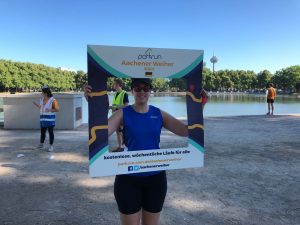 Happier days: Rebecca Hannah after a parkrun in Germany in 2019.

Winter 5k Time Trial: As well as a handicap race, this competition also serves as a 5k time trial for all members of the club. There will be a prize for the top time recorded in the series by a male and female runner. This month, Jimmy Smith set the new best time recorded by a male runner of 16:48, beating the 16:57 set by Chris Gay in December. Next fastest were Chris Gay (17:02) and Mark Hayward (18:08), with Stuart Sowerby (20:08) in 4th. In the women’s 5k time trial competition, Sarah Sales was a real dark horse, claiming first place in her first run in this season’s competition with a time of 24:26. Hopefully there will be more excellent performances to come from Sarah. It was a close fought battle between the next three fastest finishers. Rebecca Fordham (25:23) just edged out Claire Acklam (25:26) by 3 seconds, with Jo Blackstock (26:38) a close 4th. All four runners are at the top of their form. Regarding the quickest women’s 5k of the series so far, Hannah Parsons is well in the lead with her best time of 21:32 in November.

Centurion One Love virtual HM: Jimmy Smith did very well to clock 1:19:22 and finish 2nd of 289 finishers overall in the Centurion One Love Half Marathon on Valentine’s Day. He ran loops on a very hilly local route, through and around Kirtling in freezing cold conditions with a biting easterly wind. He had originally planned a flatter, wider, circular route but had to scotch those plans after only one mile into his run, due to the dangerously icy roads. He made up the route as he went along, basically following his nose. This performance earned him an age grade of 76.17%, a remarkable effort under the conditions and circumstances.

NJ virtual Appalachian Trail Challenge: ‘Blue Team’ and ‘White Team’, chosen by club secretary Sianie Painter according to first name initials of club members in the Strava Club) are fighting it out on the virtual Appalachian Trail up the eastern edge of the USA from Georgia to Maine, a distance of around 2,200 miles. All running miles done by the team members are added together each week. The challenge is to be first to reach the end of the trail in Maine. At the last count, both teams had reached the mountainous area of Massachusetts with only 43 miles between them. Blue Team are holding the lead, with 1,120 miles in the bank to White Team’s 1,077, so just over halfway there for Blue Team.

Hoohaah virtual 10k Series: It’s pleasing to report that Ali Mckenzie and Bridget Wallwin completed the virtual Hoohaah Wimpole 10k on Sunday, on a muddy, off-road local route, the third and final leg of the series. This completes their set of three attractive interlocking medals as shown below. There were no official times given out for these races but proof was needed by the organisers of having covered the distance. Well done Ali and Bridget! 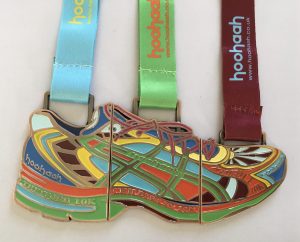 The three attractive Hoohaah 10k medals, which join together to form a colourful running shoe.