On the 8th January, Chris Gay recorded his best ever 10k time of 34:59 in the virtual Wymondham AC First Run of  ’21 10k, the first time he has broken 35 minutes, finishing in first place of 60 entrants. This beats his previous PB of 35:21, recorded in March 2020 at Milton Keynes. Although this virtual race will not count as an official PB on Power of 10 or Run Britain, it will stand as his best ever club performance for Newmarket Joggers, with a small ‘v’ suffix for virtual! Neil Pollard was the only Jogger to beat 35 minutes in 2020, with his excellent 34:50 at Dorney Lake in December.

The well-established Wymondham NYD (New Year’s Day) 10k had to be postponed until later in the year due to coronavirus, with all entrants transferred automatically, but they were also offered the chance to take part in this virtual First Run of ’21 10k (1st Jan to 8th Jan 2021) for only £5, with all of the fee going to charity. So all entrants got their New Year running fix and helped raise £300 for the Neonatal Intensive Care Unit at Norfolk & Norwich Hospital.

Chris Gay in action in the Cambridge Half Marathon

While on the subject of virtual races, one of the Joggers’ favourite fixtures of the year, the Ely NYE (New Year’s Eve) 10k, was cancelled some months ago without any entries being taken. In its place, a virtual version of the race was staged from 24th to 31st December, with £1 from the small entry fee going directly towards charity. In all there were 217 participants, including 9 Newmarket Joggers. All received a wooden medal but there were no prizes awarded, with everyone regarded as a winner. 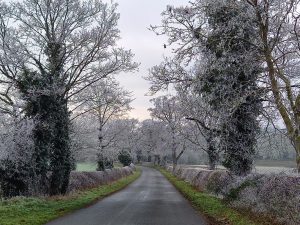 The Muddy Bubblers’ XC/Trail Super 6 Championships has had to be cancelled for January due to the current coronavirus lockdown. This is because the trail races are in groups of up to 6 runners, which is not allowed under the current 1:1 rule for outdoor exercise. This also led to the cancellation of the November event. So, after only one fixture in December, the leading team on 151 points is Kate Warboys’ bubble, consisting of Angela Barnes, Helen Wass, Tracey Bolden, Wayne Hargreaves, Rebecca Fordham and Kate Warboys. Next comes Jamie Rule’s bubble on 130 points (Hannah Parsons, James Thomson, Jason Beeton, Jon Brooker, Shane Basing and Stuart Sowerby) followed by Sianie Painter’s bubble ‘B’ team on 121 points (Alison McKenzie, Bridget Wallwin, Sarah Kinston and Rebecca Hannah). Sianie’s B Team did particularly well in the Jingle Jog fancy dress competition (see photo below), with Sarah and Rebecca picking up valuable bonus points, along with Wayne Hargreaves of Kate Warboys’ team. The current table of points and results can be seen at the following link: 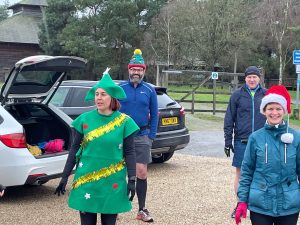 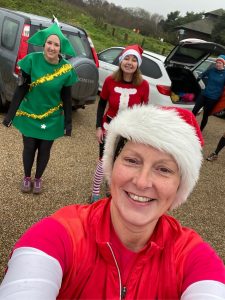 Above: Sianie Painter’s bubble in the Muddy Bubblers event at West Stow in December, with Sarah and Rebecca in the winning green outfits with gold sashes.

The Joggers’ virtual Winter 5k Handicap took place from Monday Jan 4th to Sunday Jan 10th 2021, over any local course of the participants’ choosing. Results for this race were not available at the time of writing and will be reported next week.