The final fixture of the 2020 Virtual Kevin Henry 5K League took place from the 17th to 20th September, with entrants timing themselves over a local 5km route of their choosing.  Overall there were 416 participants from the 8 clubs involved, consisting of 216 women and 200 men. Newmarket Joggers achieved a good turnout of 48 participants, with 29 women and 19 men taking part. 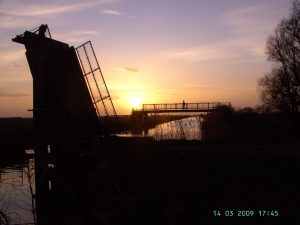 The setting sun over Burwell Lode, showing Cockup Bridge and the nearby footbridge. 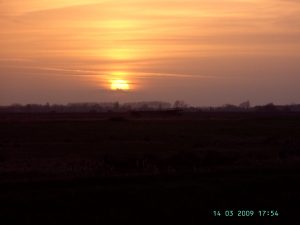 Newmarket Joggers finished in 7th place of the 8 clubs in the Virtual Kevin Henry League (women’s plus men’s teams combined), with Royston Runners in 8th. So not our best team result by a long way but a lot of enjoyment in taking part and plenty of excellent individual performances to show for it. Winners this year were Cambridge & Coleridge, from Ely Runners 2nd, Saffron Striders 3rd and Haverhill RC 4th, with Histon & Impington Runners tied with Cambridge Triathlon Club in =5th position. 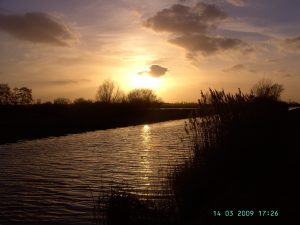 A Huge Thank You to all those representing the club in this virtual Kevin Henry Series, in what must be a surreal and unprecedented year for all of us. Full understanding too, for those loyal and equally valued members of the club who might not be motivated by virtual running, or perhaps not by running in the Kevin Henry League or the Suffolk Winter XC League. They might sometimes prefer to concentrate on their own training plans, working on improving their form and targeting specific races over their preferred distances, or simply need more time to deal with family, work and other life priorities. That is perfectly laudable and understandable. It is important that all Newmarket Joggers feel free to decide how best to use their membership. We can only ask that all members put in their best efforts when representing the club, in the way they prefer and in the races they choose. This has never been in question.

NJ Grand Prix: The Kevin Henry results counted towards the NJ Grand Prix, where positions remain unchanged from last month. Sianie Painter leads the Women’s Grand Prix on 457 points from Christine Windsor on 417 with Jenny Osbourn on 406. In the Men’s Grand Prix, Paul Holley leads on 567 points from Malcolm Osbourn on 519 and Jamie Rule on 446. The Joggers’ committee has not yet decided exactly how to play out the finish of the Grand Prix this year. They are waiting to hear about whether the Framlingham XC will go ahead as normal in November, and if not, whether there will be a virtual race. Also, whether and how to include the Wild Card race is not decided yet. We will keep you informed.