Things beginning to open up after months of lockdown

At last things are beginning to open up on the running scene, with a number of real races appearing around the country, in strict social distancing mode of course. Generally, no spectators are allowed and all events have to be pre-booked. One such event was the ‘F3 Events’ Dorney Lake meeting (near Windsor) on Saturday 5th and Sunday 6th September, which included running, swimming, aquabike, triathlon and duathlon events. We had no entries into the various running races from 5K to 20M on Saturday but Aaron Self did compete in the Olympic Triathlon on the Sunday, which was made up of 1.5km swim, 40km bike and 10km run. There were 73 entries into the race and Aaron did well to clock a total time of 2:43:20, including 1:14:49 for the 40km bike ride and 46:51 for the 10km run, putting him 54th overall against very tough competition.

Duxford Dash: On Sunday 13th September, there will be a real local race at RAF Duxford, called the Duxford Dash, over 5K and 10K. Several Joggers have already entered. The event is helping to raise funds for the Imperial War Museum, which missed out on the recent Battle of Britain 80th celebratory events in July. Runners will be able to visit the air museum free of charge after the race.

Bury to Clare: Another race now available to enter is the Bury to Clare Festive Challenge, an 18 mile trail run or walk on 12th December, which replaces the usual Festive Forest Challenge event at West Stow. The original Bury to Clare 18 Challenge was scheduled for May 2020 but had to be cancelled. All those entered have already been transferred to the May 2021 event. Provisional entries (not yet definite) for the 12th December event are being taken on the Positive Steps website, with a limit of 200. Be quick if you would like to register your interest: 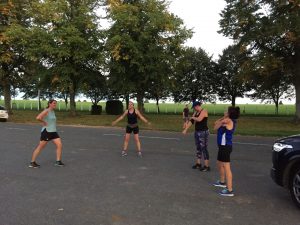 RNR: The Virtual Round Norfolk Relay (RNR) is underway and will last during the whole of September. For Team Newmarket Joggers (organised by Jim Withers), Jimmy Smith has already run his 18.13 mile Stage 10 in a time of 1:53:40. Well done to him on that great effort. There are normally 17 stages in all, some off road, others on road, but runners can choose their own local routes this year. At least participants have no need to run in the dark.

RNOB: Talking of the RNR, there is also an unofficial bike version called Round Norfolk On Bike (RNOB). Danielle Jones and Olivia Carter managed to complete it all in just 3 stages over the weekend of 4th/5th/6th September, covering  206 miles in all. That was impressive and the 77.46 mile stage was a record distance travelled on Strava for both of them. In the real RNR last September, Danielle was kindly acting as a support cyclist for the NJ team, so knows the route well. 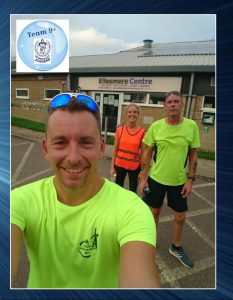 GNR: The virtual Great North Run (GNR) will be on Sunday 13th September, with over 20,000 runners entered. It’s free to enter but participants will need to pay for the medal and/or tee shirt if wanted. Everyone will run on the same day on a route of their choosing, either at 09:30 or 13:00, and will be tracked by a special phone app, playing music and commentary from previous GNR events, to help create a motivating atmosphere.

The Virtual Virgin Money London Marathon (VVMLM, all Roman numerals) has a 24 hour window and must take place on October 4th, with runners choosing their own local course. There will be a special phone app to download, somewhat similar to the GNR, and runners must transfer data from their GPS watches to this app to be ratified. It’s interesting that this race can count as a Good For Age qualifying time for next year’s VMLM, which will surprisingly be in October 2021 rather than its normal April date. Originally the VVMLM was only to be for those already entered for April’s race but they realised how much better it would be for  everyone if they threw it open to a wider audience. The entries at £20 per head are now all taken, apart from charity places. 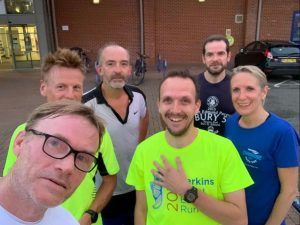 Brighton Marathon Weekend (BMW) was originally postponed after the lockdown from April 2020 to a date in September 2020, hoping it could go ahead as normal. Then it was delayed further until October 11th, with tentative hopes still remaining of putting it on as a staggered and socially distanced real event along a suburban route in Brighton, avoiding the busy city centre. The organisers were naturally keen to help the local economy by attracting as many people as possible to the town. After advice and discussions with all the relevant bodies, they came to an agreement that the marathon would need to be predominantly virtual, but they managed to keep an option for marathon runners to complete the final 10K of their marathon in Brighton, at the same time as the Brighton 10K runners, who will be able to enjoy their own socially distanced real event. So marathon runners are invited to do 20M (or 2 x 10M or 4 x 5M) virtual runs locally and to complete the final 10K in Brighton. Other options are to do the whole 26.2 mile marathon virtually or to split it up into  legs as above. The virtual marathon needs to be completed from September 30th to October 11th.

The Milton Keynes (MK) Marathon Weekend is probably the nearest big marathon event to Newmarket HQ, with around 3,000 runners in the marathon last year and lots more at half marathon and shorter distances. It was postponed from May Bank Holiday to September 2020 during the lockdown. Like Brighton, MK supporters were very keen to keep this race in town and that’s exactly how it stays in its virtual mode, owing to some smart thinking by the organisers. Rather than hold the virtual runs all on the same day (like London and GNR), runners will be allowed from September 6th to September 19th to complete their run, i.e. two whole weeks. This will avoid overcrowding and, hopefully, still bring in lots of people to help the local economy. The route will be exactly the same for everyone but not marshalled in any way. They have designed a special phone app which will navigate runners all around the route by voice and record their runs on GPS at the same time. There will also be direction signs to help. No doubt many runners might be tempted to come to recce the course and visit the town more than once. MK is fortunate to have plenty of space and lots of parks and cycle paths to avoid the need for running on roads. There may still be places available for entry.