On Saturday 15th August, in one of the first real, official races to take place in the area since the Covid-19 lockdown, Paul Holley came a very creditable 12th of 180 runners in the Stour Valley Path (SVP) 50K (~31 miles) in a time of 4:42:08. This put him 2nd of 29 in his M50 age group. Holley had prepared hard for this race, putting in increasingly longer training runs in the lead-up. The race followed the SVP from Sudbury in Suffolk to Manningtree in Essex. The SVP100K from Newmarket to Manningtree also took place, which is more or less the whole length of the River Stour, but no Joggers participated in this race. The races were held under strict social distancing guidelines, where participants were staggered at the start by 3 minutes and set off in batches of no more than 6 runners at a time.

Back to virtual races, Troi Baxter did well to complete the Great Virtual Race Across Tennessee 1000K (actually 1,022km, ~635 miles) well within the time period. Runners had from May 1st until August 31st 2020 to total up the miles on Strava. This race went (virtually) from Memphis in the southwest of Tennessee to Knoxville in the northeast of the state and attracted some 19,000 entries from across the world. Troi (left) and friend are seen with their medals below: 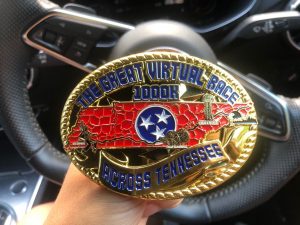 The Virtual Race Across Tennessee 2020 was conceived and organized by ‘Lazarus Lake’ Gary Cantrell, a former ultra runner, now turned ultra walker, who walked across the USA in 2018, from Rhode Island to Oregon. He normally puts on the notorious Barkley Marathons in Tennessee, a gruelling 5 x ~20 mile loop over exceptionally difficult and mountainous terrain, which was cancelled this year due to coronavirus. Completing only 3 loops within the 60 hour time limit is patronisingly considered a ‘Fun Run’.

Talking of which, Newmarket Joggers are continuing in August with their own version of the Barkley Marathons called the ‘not-Barkley Marathons’, organised by Sianie Painter, the club secretary. The idea is to clock up the equivalent distance of 5 x marathons (131 miles) in training runs during the month, or as many miles as possible. 3 x marathons (78.6 mi) will be awarded ‘Fun Run’ status. Jimmy Smith is well in the lead and is near to completing his 4th marathon. Next come Henry Hamilton, Troi Baxter and Jonathan Ollington, who have all completed over 2 marathons in distance so far.

As you will no doubt be aware, the dates for the August Virtual Kevin Henry 5K have been changed from last weekend to this coming weekend, from Thursday 20th to Sunday 23rd August. We are hoping for a really good turnout to try to lift ourselves higher in the league table. If you completed your run last week, you may use that run as your entry if you wish. Good luck to everybody in the race.

There will be a virtual Round Norfolk Relay taking place in September. If you would like to be considered for a place, please contact Jim Withers at jim@newmarketjoggers.co.uk