After an encouraging performance to finish =5th of 8 in the 3rd Virtual Kevin Henry League 5K in July, Joggers will be looking forward with more confidence to the 4th virtual race of the series from 20th to 23rd August, which would normally have taken place in Kedington, organised by Haverhill Running Club. Everybody who runs earns one point for participating in the race, so we shall be hoping for another big turnout, similar to or even better than the 59 we had in July. The crucial points are awarded to our top 5 male and top 5 female finishers, according to their overall positions within their gender, so we are very much dependant on our fastest runners for a good result, backed up by the participation points earned by all the other Joggers. Despite our good performance last month, we still remain 7th of 8 in the league table, so we need another great score to lift ourselves up higher.

This race counts towards the NJ Grand Prix Championship, being the 7th of a possible 9 fixtures, assuming the Framlingham XC (the normal final fixture) goes ahead in November, in virtual or real form. It’s a close contest between Paul Holley (403pts) and Malcolm Osbourn (386) for the men’s competition, with Jamie Rule currently third on 310. For the women, Sianie Painter (339) is in command from Christine Windsor (289) and Jenny Osbourn (286), but none of the contenders in the men’s and women’s Grand Prix competitions can afford to miss a fixture at this stage.

Full marks to Mark Hayward, who ran a half marathon every single day in July, to help raise funds for Arthur Rank Hospice in Bury St Edmunds. That’s a phenomenal 406.1 miles (653.8km) of half marathons in 31 days. Not content with that, he did a cycle ride every day as well! Congratulations to him on that great effort. He would have been running in the London Marathon this year as a Good For Age qualifier, following his 2:47:28 in 2019 (see attached photo), but it has recently been announced that the rearranged VLM for October 4th will now take place for elite runners only. Neil Pollard and Chris Gay would have been entitled to the highly prized Championship Entry with their respective times of 2:38:38 and 2:40:07 last year. Hopefully we’ll see them all perform for the Joggers in the VLM 2021. 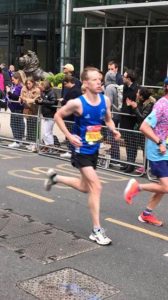