Since last Monday, club members of Newmarket Joggers have been confined to barracks, as it were. All club races and training sessions have been cancelled until at least the end of April on the strict advice of the governing bodies UK Athletics and England Athletics. Fortunately, the government advice has so far been to continue exercising outside, either solo or with a close friend or family members, while keeping a respectable and safe distance from others. This of course could change at any time. During the last week, Newmarket Joggers have been posting lots of runs on a new Strava Club called “Newmarket Joggers in Exile”. Some “virtual” races have already been planned, including the final 5K Winter Handicap of the season at the beginning of April (the actual race having been cancelled), where members will compete on their own against a given handicap time and their results displayed in a table. 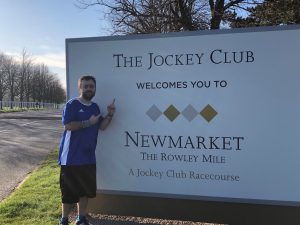 A Newmarket Jogger in Exile: Joe Cormack at the start (or was it the finish?) of his 16 mile virtual Bedford Autodrome race on Newmarket Heath…his longest ever run. Photo thanks to Joe Cormack

Talking of virtual races, the Bedford Autodrome Running Grand Prix was due to take place on Sunday, March 22nd but obviously had to be cancelled due to coronavirus. It had multi-loop races of all distances from 5K to 20 miles. The organisers decided to turn the races into a virtual online competition with medals and T-shirts to be posted to entrants who sent in their Strava GPS uploads. Entrants were allowed until May 31st to complete their runs. Joe Cormack was entered for the 16 mile race and decided not to hang around. He completed his virtual race in beautiful, sunny, spring weather over Newmarket Heath on Sunday in 2:31:14, the same day it was originally scheduled. It was the longest run he’d ever done. He was accompanied by Jogger Megan Beecroft, in what was probably her longest run too. Also completing his virtual Bedford Autodrome 20 mile race on Sunday was Chris Aylmer (4:34:18) who opted for an out & back run to Haverhill.

At present, that is the sum of the races completed over the weekend by club members. No doubt there will be more virtual races coming online, though it might be advisable to order an indoor treadmill before stocks run out. 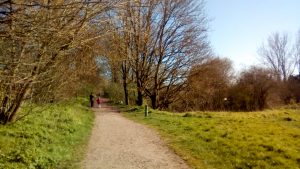 The disused railway line in Haverhill, now a footpath and at its best in the spring sunshine. Photo by Chris Aylmer

The final fixture of the Suffolk Winter XC League, due to take place at Haverhill on March 29th, has been cancelled. So after 5 fixtures the league season is now complete. The previous two fixtures at Pakenham (Bury St Edmunds Pacers) and Woodton (Bungay Black Dog RC) managed to go ahead on the 1st and 8th of March before the coronavirus ban on races came into effect. The results of these events have now been published in full and also the final team placings in the league. From the team aspect, the top ‘A’ team of our combined club of Newmarket Joggers & Sudbury Joggers (N&S) finished 7th of the 20 competing clubs in all three of the main competitions i.e. combined team (highest placed 7 men + 4 women), women’s team (highest placed 4 women) and men’s team (highest placed 7 men). Our near neighbours Saint Edmund Pacers won all three ‘A’ team competitions, so congratulations to them on that great effort.

On an individual age group level the results have not yet been finalised. They are normally based on a runner’s best 4 placings out of 6 fixtures. Whether they lower this requirement is not known, considering that the final fixture has been cancelled. However it is clear that Neville Clarke of Newmarket Joggers has won first place trophy in the MV65 age group competition among 13 competitors, so a great achievement for him and the N&S team. Other notable achievements were by the ultra-consistent Malcolm Osbourn, who ran in all five fixtures and looks certain to finish a well-deserved 2nd of 9 in MV70, and from Sudbury Jogger Andy Buck who should take 3rd position of 24 in the MV55 group. 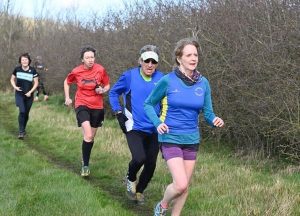 Our N&S team member Ruth Cowlin of Sudbury Joggers being closely tracked by Malcolm Osbourn of Newmarket Joggers, during the Bungay XC at Woodton on March 8th. Photo thanks to Ruth Cowlin.

For the women, Ruth Cowlin of Sudbury Joggers is currently showing as 4th of 18 in FV55. However, those above her and the two below her have no more than 3 races to their names, compared with Cowlin’s complete set of 5, so a great chance that she could win the age group if the normal rules are obeyed. It would be well deserved, not least for her commitment and loyalty to the league. Also a special mention for Jenny Osbourn, who is equally committed to the league and continues to perform at a high standard in her FV70 age group. As well as that, she regularly brings homemade savoury pastries, cakes and sandwiches for the team to enjoy afterwards, adding to the atmosphere and camaraderie.

New member Charles Jones has been running exceedingly well in his first cross country season, despite missing a fixture due to injury problems. He is placed 2nd of 18 in MV60 but unfortunately has completed only 3 fixtures, so not enough to qualify this year unless hey relax the rules. Next year could be his year. Paul Holley also ran out of his skin and topped his MV50 age group in both his runs; again not enough runs to qualify for a trophy. Thanks to every one of those Newmarket and Sudbury Joggers who represented N&S in some or all of their fixtures and added to the team spirit and effort.

English Schools Cross Country Championships: Newmarket Jogger James Tweed’s 17 year-old son Bertie, who is also a member of our club, was honoured to be chosen to represent his Leicestershire & Rutland school in the English Schools XC Championship Finals at Sefton Park in Liverpool on March 14th. He ran in the Senior Boys U19 Final and finished 109th of 324 overall in a time of 23:12 over the 6.7km course. That’s an average pace of 5:35/mile (3:28/km) in extremely muddy conditions, so a fantastic performance against the best in the country. It earned him a Diamond club standard age grade of 76.58% (based on road racing), a considerable underestimate considering this race was off-road in very poor ground conditions. 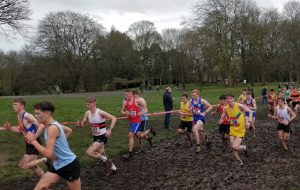