After success in the Suffolk Cross Country Championships early in January, Neil Pollard ran his first road race of the year in the Essex 20 miler at Rochford on Sunday. In a top class field, he showed tremendous speed to clock 1:58:12 (80.54% age grade), finishing 23rd of 347 overall and 4th of 40 in his MV40 age group. Pollard admits he went a little too fast early on and paid for it later in the race. However, this was a late transfer entry and possibly not fully integrated into his training schedule. It was an impressive performance and can serve as a booster and appetiser for a marathon attempt in the spring.

Also exhibiting top speed on Sunday was Elke Hausler in the British Masters Athletics Inter-Regional 3000m indoor event at Lee Valley Athletics Centre, Edmonton, London. She clocked 12:09.13 in the W50-59 age group race, which earned her 88.60% age grade. Hausler was hoping to represent GB in the Braga World Masters Championships in Portugal on the 18th and 22nd March, competing in the 3000m indoor race and the 5K Cross Country events respectively, but unfortunately the event has been cancelled due to the corona virus outbreak. On 8th March she has another indoor 3000m race at Lee Valley.

Meanwhile, on an attractive new 5 mile course on the Nether Hall Estate in Pakenham, near Bury St Edmunds, Newmarket Joggers (NJ) joined forces, as usual, with Sudbury Joggers (SJ) to compete as club N&S in the 4th of 6 fixtures of the Suffolk Winter Cross Country League. Altogether, 24 NJs and 6 SJs took part, with 19 men and 11 women in a total field of around 260 runners. All runners scored points based on their finishing positions within their gender, with the top 4 women and top 7 men in each competing club becoming the ‘A’ team members for women’s (4 to a team), men’s (7 to a team) and combined (11 to a team) divisions and subsequent finishers designated as ‘B’ or ’C’ team members, competing against their counterparts from other clubs in their own subdivisions. 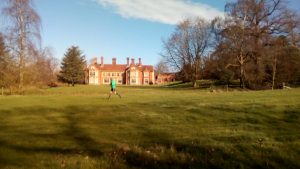 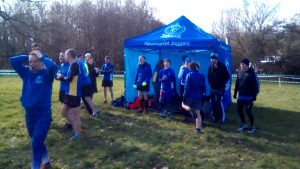 Newmarket and Sudbury Joggers in the sunshine, preparing for the start of the Suffolk Winter League fixture on the Nether Hall Estate in Pakenham. Photo: Chris Aylmer 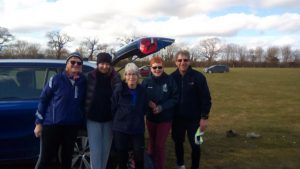 After the race, it’s farewell to a lovely day’s running on the Nether Hall Estate in Pakenham. From the left: Christine Windsor, Bridget Wallwin, Jenny Osbourn, Caroline McIntosh (kindly acting as marshal while injured) and Malcolm Osbourn. Photo: Chris Aylmer