Huge turnout by Joggers in Cambridge Half Marathon

The Saucony Cambridge Half Marathon survived the coronavirus scare on Sunday and started in bright, sunny, breezy weather on Midsummer Common, with a total of 11,251 participants. There were 64 Newmarket Joggers in the lineup.

Chris Gay was in top form and first Jogger home in 49th overall place, in a new PB time of 1:14:05, over a minute quicker than his PB time last year. He was also an impressive 9th of 989 in his MV35 age group. He was followed closely by Mark Hayward (1:15:58), in 69th position and 15th in the same age group; also a PB for Hayward by over a minute. James Smith (1:17:39) was 3rd Jogger home, finishing 98th overall and 11th of 925 in MV40. Smith had also run in the National Cross Country Inter-Counties Finals in Loughborough at 2:45 pm the day before, so some feat to perform at this level just 19 hours later. 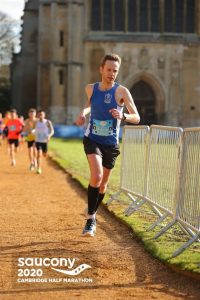 James Smith passing through King’s College grounds on his way to a 1:17 finish in the Cambridge Half Marathon. Thanks to James Smith for photo

Of particular note: The highest age grade of all our runners (83.50%) was earned by ace veteran Paul Holley, who was 4th home for the club and 165th overall in a time of 1:20:07, finishing 7th of 677 in his MV50 age category. He continues to represent Newmarket Joggers at the highest level.

Megan Beecroft enjoyed a tremendous first half marathon and came in 4th female Jogger at around 1:48. Unfortunately she lost her bib number + chip during the race and failed to get an official time…so annoying. Nor was she wearing a GPS device for an accurate estimated time or record of her run. Using GPS uploads on Strava Flyby, you can actually get the exact time of day you began and finished a race, within a few seconds, so very useful to know when chip times don’t function and may be enough evidence for a race organiser to accept. 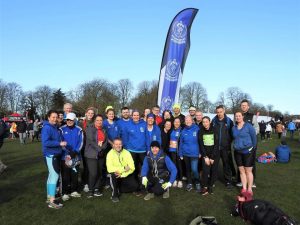 Team photo at the Cambridge Half Marathon 2020. There were 64 Joggers taking part in all. Thanks to Emma Reader for photo.

There were a number of other PB times achieved and many excellent first time half marathon performances from the Joggers, on a fast and well-designed course, passing through the iconic areas of the town centre as well as visiting Grantchester on the River Cam. For complete Newmarket Joggers’ results please use link:

Also on Sunday, up near Rugby in Warwickshire, Henry Hamilton-Gould was in great form and took on the Draycote Water 20 mile race, achieving a PB of 2:28:18 and finishing 18th of 156 runners overall. 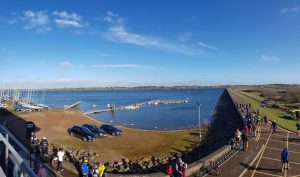 Elke Hausler was competing in the 3000m indoor race at the British Masters Athletics event at the Lee Valley Athletics Centre in Edmonton, London on Saturday. She put in a top performance to take Bronze medal in the W55 age group in a time of 12:03.38, which earned her 89.3% age grade. Elke was due to represent GB in the World Masters Championships in Braga, Portugal later this month but it has now been cancelled due to coronavirus. 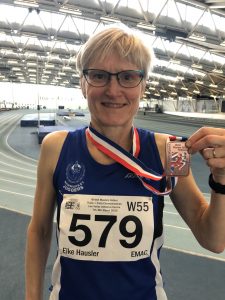 Elke Hausler with her Bronze medal for the 3000m W55 final at Lee Valley. Photo thanks to Elke Hausler

The 5th of 6 fixtures of the Suffolk Winter Cross Country League took place on Sunday in the village of Woodton, near Bungay, organised by Bungay Black Dog RC. Newmarket Joggers (NJ) and Sudbury Joggers (SJ) were teamed up together in this League as usual, competing as club N&S. The venue was a new one and the course went nearly 5 miles around the fields of a working stock farm; quite muddy and somewhat bumpy in places but a fair challenge. The women’s team comprised 3 NJs and 2 SJs and the men’s team 6 NJs and 2 SJs. Official times and results have not been published yet, but the overall positions of our runners, out of a total field of about 240, were as follows: 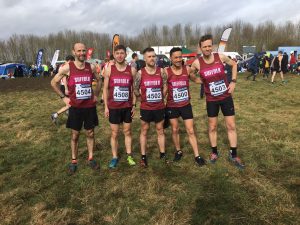 The 5 members of the Suffolk County XC men’s team at Loughborough, which should have been at least 6. From left: Andrew Southwood, Scott Williams, Scott Ramsey, Neil Pollard and James Smith. Photo thanks to James Smith.

On Saturday, it was the Inter-Counties Cross Country Finals in Loughborough, where a total of 550 senior men and women were competing in the colours of 47 county teams from across the UK, as well as all the younger age groups. Two Newmarket Joggers, Neil Pollard and James Smith, were honoured to be chosen for the Suffolk County men’s team, comprising 9 members of which the first 6 finishers were to count for points. Unfortunately, only 5 of the 9 chosen Suffolk team members were actually present on the day, which meant that they knew before the race that they could not qualify for a team result. This was the case for 16 other men’s county teams, who were also lacking a ‘quorum’ of 6 athletes. Nevertheless, it was still an enviable opportunity to compete for Suffolk on an individual level against the best in the UK.

James Smith clocked 46:25 over the very muddy 10K course, where more than a few running shoes were lost in the boggy, sticky ground. He finished 2nd home for Suffolk and 217th of 293 overall, in a highly competitive field of top class runners; no fun runners here. Neil Pollard was sadly unable to finish due to feeling unwell. The winners of the men’s team competition were North East Counties from Yorkshire and Sussex.