A busy weekend for Newmarket Joggers despite the mounting coronavirus gloom

The Robert Tomlinson Stowmarket Half Marathon took place in the village of Buxhall, in wet and windy weather, with 5 Joggers among the 332 finishers. Mark Hayward (1:17:45) was first home in 5th overall position, closely followed by James Smith (1:19:11) in 7th, both excellent performances just 7 days after their top efforts in the Cambridge Half Marathon. Then came Neville Clarke (1:49:11), 2nd in MV65, Clive Purbrook (1:54:09) and Nicole Smith (2:07:20), all good performances in the windy conditions.

Up in Lincolnshire, Andrew Taylor did well in the wet, windy weather to complete the Sublime Long Sutton 10K in 45:05, coming 4th of 18 in MV45 and 13th of 148 runners overall. Meanwhile, over at Milton Keynes in the MK Running Festival 10K event, Chris Gay came an impressive 2nd of 933 runners overall, clocking 35:21, which is an all-time PB for him by 18 seconds.

New member Anderson McKeague competed in the Beowulf 10K trail race at West Stow Country Park, which included a loop through the Kings Forest and a scenic lap of one of the Lackford Lakes. He did well to come 51st of 315 finishers in a time of 51:11. At the same event, Iain Perry (17:47) enjoyed a run in the Beowulf 5K, which was later adjusted to 3.5K, due an error in course directions. In Northamptonshire, Chris Aylmer (3:46:16) took on the Oundle 20 mile race in very wet weather, a favourite local marathon preparation race, finishing 520th of 604 participants. 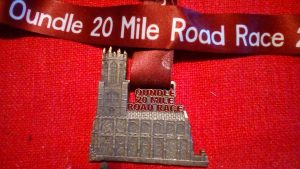 The attractive Oundle 20 medal, depicting St Mary and All Saints Church in Fotheringhay, one of the historic villages the route passed through. Photo: Chris Aylmer

On Saturday, 2 Joggers ran in the Ancient Trails 15 mile Challenge, which took place at Fulbourn in Cambridgeshire and went along parts of the local Roman Road, Fleam Dyke and Icknield Way. Sianie Painter (2:54:39) came home a very creditable 10th of 36 female runners and 2nd of 11 in FV50. Gillian Green (3:37:50) also put in a good effort.

NB. In keeping with the recently announced hyping up of coronavirus protective measures in the UK, all training on Tuesdays and Thursdays, including the final 5K Handicap of the winter season, will now be cancelled at least until the end of April. The final Suffolk Winter XC League fixture at Haverhill on March 29th has also been cancelled.