Storm Ciara causes cancellation of races across the UK

The forecast high winds of Storm Ciara caused almost all races to be cancelled or postponed across the UK on Sunday. This included the huge 25,000 participant London Winter 10K Run in aid of Cancer Research UK, in which several Joggers were entered. Newmarket Jogger Iain Perry plus his wife Linda and other friends and relations were all geared up and looking forward to this race. When they heard it had been cancelled they improvised their own Winter 10K Run through Newmarket on Saturday to pre-empt the storm. 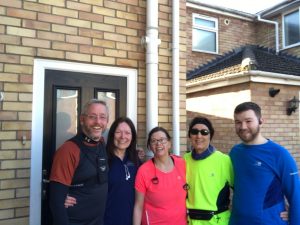 Jogger Iain Perry on the left with Janet Jenkins, Linda Perry, Paula Wiseman and David Wiseman. The group organised their own Newmarket Winter 10K Run on Saturday in lieu of Sunday’s cancelled Winter 10K Run in London. Thanks to Iain Perry for photo.

Jogger Phil Blundell was entered into Sunday’s Pipley Wood Mud Bath, near Bath in Somerset. It was cancelled due to the high winds but he did manage to transfer to the Bath Dark Horse 10K at the same venue on Saturday, the day before. He is the only known Jogger to have managed to take part in an actual race over the weekend. He did very well to clock 49:34 over the muddy trail route, 12th of 184 finishers and 3rd of 22 in MV40-49.

Epic Journey: Henry Hamilton-Gould has been having lots of fun running around Lake Constance in Europe. He completed a 22 mile run over the weekend, passing through Switzerland, Austria and Germany in the same day. He’s also taken some lovely photos:

Photo thanks to Henry Hamilton-Gould taken in Bregenz, Austria during his epic run round Lake Constance, through 3 countries in one day. 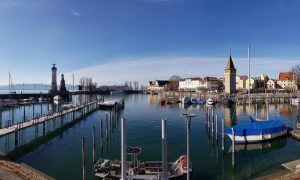 Photo thanks to Henry Hamilton-Gould, taken in Lindau, Germany on the shores of Lake Constance.

Winter 5K Handicap: Last Tuesday evening in town, it was the monthly Newmarket Joggers Winter 5K Handicap race, where runners are time-staggered at the start, with the slowest going first and the fastest last, according to their estimated times. For full results please see:

This month’s race was won by Sophie Adams in a time of 28:34, from Jackie Henley 2nd (29:32) and Sam Sadler 3rd (17:38). Well done Sophie on her first run in the club Handicap this season. It’s remarkable that Jackie has been in the top three finishers 3 times out of 4 races so far this winter, showing how much she has progressed over the season. Sam pulled out a really fast run to catch all but the leading two runners, his quickest time in the handicap since February 2016.

On times recorded alone, the leading female Jogger was Joanna Cole in 20:18 from Megan Beecroft (22:06) and Nicola Delderfield (23:20). Joanna is progressing smoothly and confidently after some years absence from running and still holds the course record of 18:38 recorded in the 2011/2012 season. Megan and Nicola both joined the club recently and have been enjoying regular track training with club coach Mick Graham to sharpen their speed, which is paying dividends.

The leading male runner on time was Chris Gay in 16:53 from James Smith (16:57) and Paul Holley (17:29). This was a course PB for Chris Gay, the first time he’s been under 17 minutes, and he’s been running the Handicap since 2012. He’s so consistent and is putting in vast amounts of training mileage for imminent half and full marathons. James was raring to go in this race and can get better still. Paul showed he can still roll out 17 minute 5Ks with ease.

According to age-graded performances, the top 3 women were: Claire Acklam (74.54%), Joanna Cole (73.97%) and Ruth Eberhardt (67.54%). Since she joined the club last year, Claire Acklam has been performing at a very high standard in the FV55 age group despite taking up running only very recently; clearly a natural running talent. Ruth Eberhardt also pulled out a great run, possibly relishing the faster ground conditions after months of muddy parkruns in Nowton Park.

The top three men on age grade were: Paul Holley (86.37%), James Smith (80.92%) and Charles Jones (78.98%). Paul Holley is back into Super Sapphire club standard (85%+) with this terrific age-graded performance. It’s the third year in a row he has reached this standard, since records began in 2018. James is now in Sapphire (80%+) with Charles Jones knocking on the door. It’s great to see Charles back in top form after his recent injury setback. He’s another natural running talent like Claire; just took up running last year in his late fifties after years as a jockey and riding out horses.