In the Anglian Schools Cross Country Championships on Saturday in Boston, Lincolnshire, Junior Newmarket Jogger Cerys Bithell put in a great effort to finish 5th of 70 runners in the U13 Girls’ 2,050 metre race and 2nd of 16 in her Suffolk team. She was representing Suffolk Schools, having finished 3rd of 52 in the U13 Suffolk County qualifying race at Woodbridge in January. In the Boston race she was competing against the cream of her age group from schools in Suffolk, Cambridgeshire, Norfolk, Lincolnshire and Northamptonshire so a big step up in class. She was clearly unfazed by the competition and helped her Suffolk team narrowly win the U13 Girls’ team trophy from Northamptonshire, based on the positions of their top six finishers in the race. Suffolk was also the overall county winner of the Championships across all the age groups. As yet, no race times have been published. 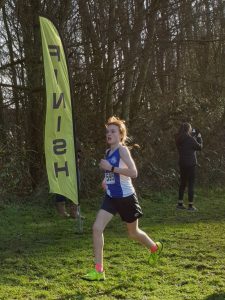 Cerys Bithell powering to the finish in the Anglian Cross Country Championships in Boston, Lincolnshire. She finished 5th of 70 in the U13 age group against the best runners from Suffolk, Cambridgeshire, Norfolk, Lincolnshire and Northamptonshire. Thanks to Ellie Bithell for photo.

U13s are not able to go on to compete in the National Schools Cross Country Championships at Liverpool in March. However, Cerys will be able to compete in the Junior (U15) age group next year and hopes to get the chance to represent Suffolk in the Nationals. She is keen to keep up her regular training at Newmarket Junior Joggers during the week and test herself regularly in parkruns on Saturdays and at the local Newmarket GRL (Great Run Local) 2K and 5K on Sundays.

Also chosen to represent Suffolk at Boston was Newmarket Junior Jogger and St Benedict’s School pupil Alex Swarbrick, who was running in the Senior Boys’ team. He put in a good effort against extremely tough competition.

Windmill HM: On Saturday, over at the Suffolk Running Centre in Barrow, near Bury St Edmunds, three Joggers ran in the Windmill Half Marathon, named after the famous windmill in Dalham. This was a scenic circular road route passing through Higham, Gazeley, Ashley, Dalham  and Denham. Alan Shand MV60 was 4th of 25 runners overall in 2:03:51 and has been progressing steadily over the last 6 months. Then came Angela Brennan in 2:29:50 and Gillian Green in 2:50:26, two loyal participants at Suffolk Running Centre events.