Suffolk Cross Country: On Sunday, Newmarket Joggers put in an outstanding team performance in the Suffolk Cross Country Championships 10K race at Culford School, near Bury St Edmunds, carrying off 1st place men’s team trophy for the first time in their 36 year history. The silver cup trophy is engraved with the names of winners going back to the 1926-27 season and, interestingly, the town of Newmarket appears once before on this trophy. It was won by a club called Newmarket Harriers in the 1957-58 season, 62 years ago! Now there’s a  traditional name to revive…..has a nice ring to it. 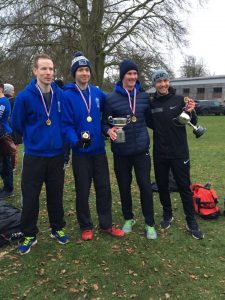 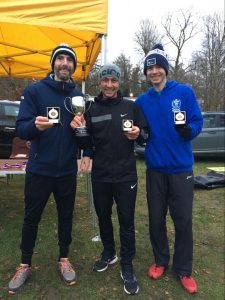 Above left: The winning team members from left: Mark Hayward, Jimmy Smith. Paul Holley and Neil Pollard, with Paul holding the team trophy. Above right: Neil Pollard (centre) and Jimmy Smith (right), 1st and 3rd in MV40, with 2nd placed Andrew Southwood of Saint Edmund Pacers on the left. The silver cup held by Neil is believed to be for 1st overall veteran runner (over 40). Thanks to Nicole Smith for the excellent photos. 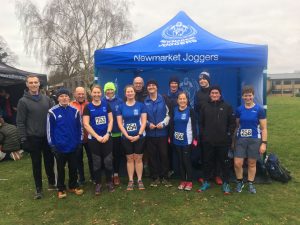 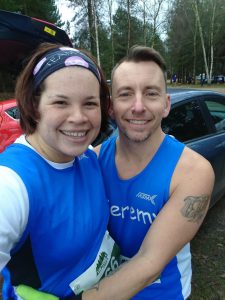 Emma and Jeremy Reader at the High Lodge Trail 10K on Sunday, enjoying their first race of 2020 together, in an attempt to reach a goal of 245 miles this year in aid of a charity dear to their hearts. Photo thanks to Emma.

Canicross; There was also a Canicross 10K event following the standard 10K at High Lodge. Newmarket Jogger Jon Brooker and his young dog Stanley entered again, as they did in the first of the series last month. This time they came 4th of 61 in a time of 41:23, a PB by almost 2 minutes, and finished 1st of 6 in the M50+ division, so very well done.

Wymondham NYD 10K: After all the excitement of the Suffolk Cross Country event, we need to catch up with the results from New Year’s Day and New Year’s Eve. Well done Mark Hayward, who set a new all-time 10K PB of 35:38 in the Wymondham 10K on New Year’s Day, finishing 3rd of 105 in the Senior U40 age group and 8th of 662 overall. This was just 4 days before his top performance at Culford School. Paul Dockerill (40:25) also ran very well at Wymondham, finishing 9th of 66 in MV40 and 48th overall.

RAF Marham NYE 10K: Switching to the RAF Marham 10K on New Year’s Eve, Neil Pollard was in peak form and finished 1st of 294 runners in 34:42, a great end to a brilliant 2019 for him. The course was flat and fast, around service roads surrounding the base. Hannah Pollard (52:46) also made a very encouraging comeback from long term injury, finishing 42nd female of 132 in her first race for over a year. It’s great to see her back in action again. Let’s hope 2020 brings her better fortune.

Ely NYE 10K: Over at Little Downham, it was the long awaited year end celebration of the Ely NYE 10K, a favourite race for the Joggers, where 23 of them were in action. 19 year-old Jamie Sales was first Jogger home and in excellent form, clocking an all-time 10K PB of 36:23 and finishing 23rd of 597 runners overall. He was unfortunate to have to stop to loosen his too-tight shoe laces, which were causing him discomfort, so would have otherwise finished in an even better time. Second and third Joggers to finish were Noel Benn (43:19), 17th of 59 in MV45 (his first race of the year) and Andrew Taylor (44:23) 20th in MV45, the latter having had a very busy program and consistent year of top performance over the 10K distance. For the women, Emma Newman enjoyed a great run, clocking 47:09 to finish 30th of 269 female runners overall. Next came Sarah Sales in a course PB time of 53:09, putting her 10th of 35 in FV50. Close up and third female Jogger home was Lynda McCormack in what is believed to be all-time 10K PB of 54:07, 8th of 25 in her FV55 age group. Unfortunately, results of this ARC race don’t make it onto Power of 10 to enable easy checking. Lynda really has progressed in form throughout the last year, over all distances from 5K to Half Marathon. 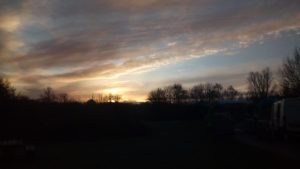 Peterborough NYE 10K: Up at Ferry Meadows, among 729 participants, Chris Aylmer (56:42) was the sole Jogger in the Sublime Peterborough NYE 10K and had an enjoyable run in bright sunshine over this picturesque, fairly flat and mainly off-road route along hard paths. Due to some mud caused by flooding, they had switched from the original route, completely within Nene Park, to the winter 10K course, which involved some road running. 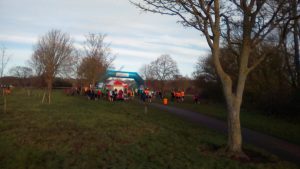 Winter 5K Handicap: There will be an analysis of the January Winter 5K Handicap results, so we can see who did best according to position, time and age grade %. Congratulations to our top three finishers in the 5K Handicap on Tuesday evening: 1st Jackie Henley, 2nd Aaron Self, 3rd Alan Shand. It looked like a very good turnout with the atmosphere buzzing.