Two Junior Newmarket Joggers, Cerys Bithell (‘Minor’ Girls, Year 7) and Jake Garratt (‘Intermediate’ Boys, Years 10/11), had notable success in the Suffolk Schools XC (Cross Country) ‘B’ race at Woodbridge, near Ipswich on Thursday 9th January. This was the third and final trial race within Suffolk that determined who would be picked to represent the county in the regional Anglian XC Championships at Boston, Lincolnshire on 1st February 2020. Those successful at Boston could go on to the National Schools XC Championships at Liverpool in March, though not those competing in the youngest ‘Minor’ age groups.

Bithell clocked 10:02 over an approximately 2K route at Woodbridge to finish 3rd of 52 competitors in her age group, which guaranteed her a place in the regional final in Boston. Jake Garratt finished 12th of 51 competitors in a time of 23:02 in his ~5K race, with the top 20 to be considered for a place at Boston, so fingers crossed for him.

Showing just how good her current form is, Cerys Bithell was first finisher in the Newmarket Great Run Local (GRL) 2.5K on Sunday 12th January, in a time of 11:17, a long way ahead of the rest of the field. She has been regularly using the weekly Newmarket GRL as an essential part of her training, to very good effect, and has also run the 5K distance a number of times.

Another Junior Jogger doing very well at the GRL on Sunday was Lilly Basing (aged only 9), attempting the GRL 5K distance for the very first time following regular runs in the 2.5K. She clocked an impressive 30:45 over this very hilly and muddy course, under the watchful eye of Newmarket Joggers Coach Emma Reader. 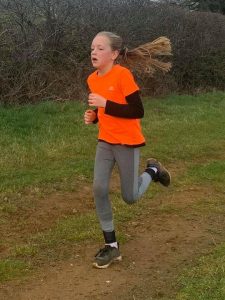 Junior Jogger Lilly Basing in her very first 5K run in the Newmarket GRL. Photo thanks to Emma Reader

Switching to the Senior Joggers, it was the monthly Winter 5K Handicap on Tuesday 7th January, where runners were time-staggered at the start, with fastest runners going last and slowest first. First to finish of 47 runners was Jackie Henley in 31:03 from 2nd placed Aaron Self (27:39) and 3rd placed Alan Shand (24:43), all three receiving trophies. Nicely paced runs by these club members, who have all shown good recent improvement.

Well done to all the participants.

Welcome to all the new beginners, who start their 10 week training course with Newmarket Joggers on Monday 13th January. We hope you will enjoy your introduction to running and develop a real love for the sport. Thanks to coaches Stuart Janes and Emma Reader, who will be supervising the training sessions, and to any other club members who can pop along to give much-appreciated encouragement on a Monday evening.