On Sunday 29th December, the new Sublime Cambridge Christmas 10K event attracted a field of 591 participants, among them 7 Joggers. This scenic route went along the Cam riverside, over Stourbridge Common, Jesus Green and Midsummer Common and crossed the river on 4 different pedestrian bridges, exploring Chesterton on the way. The registration headquarters were at the very welcoming Fort St George public house, overlooking Midsummer Common and backing onto the River Cam. 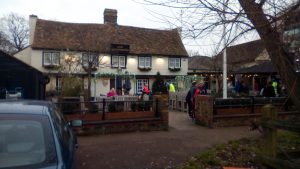 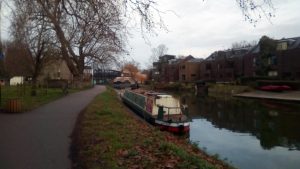 Part of the Sublime Cambridge Christmas 10K route, along by the River Cam. Photo Chris Aylmer

Also on Sunday, Richard Groom made the trip to Hertfordshire, for the Buntingford Year End 10, which is organised by Royston Runners and takes place annually between Christmas and New Year. He put in an excellent effort to clock 1:22:52 in his first known 10 mile race to date, finishing 190th of 485 runners overall.

From Saturday 28th to Monday 30th  December it was the Suffolk Running Centre’s Triple Tipple event at Barrow, where entries were available from 5K to ultramarathons on all three days. On Saturday, 3 Joggers entered the advertised 10K event, which was actually a quarter marathon loop of 10.55K (6.55 miles). The course was extremely hilly and conditions were very muddy and uneven on the off-road sections, which comprised about a third of the distance, so a very difficult route altogether. Francesca Laughton was first to finish in 1:05:04 from Aaron Self (1:09:55) and Angela Brennan (1:13:57). On the Sunday, Gillian Green also opted for the 10K event, though not yet confirmed if this was also the quarter marathon loop. She finished in 1:11:11, which was her best 10K time this year, so an outstanding effort over this challenging course.

Newmarket Joggers are gearing up for the Ely NYE 10K on Tuesday, a favourite fixture in the calendar. Also, the Suffolk Cross Country County Championships will be held on Sunday 5th January at Culford School, a few miles north of Bury St Edmunds, where the club has a good chance of winning some trophies.