Many Joggers among supporters of the 24 hour, 100 mile fundraising run by Ben Blowes and Martyn Taylor

From Friday 10:00am to Saturday 10:00am, starting/finishing at Tesco, Newmarket (with excellent support from Tesco), ex-Newmarket Joggers Ben Blowes and Martyn Taylor ran 24 x 4.2 mile laps through Newmarket to help raise funds for 10-year-old Evelina, who was seriously injured recently when hit by a bus in Exning Road near her Laureate School. Ben and Martyn started each lap from Tesco, on the hour, every hour, inviting all to join them for a lap or two. Each lap passed by Laureate School in Exning Road and it was uplifting to see the children and teachers waving, cheering and giving high fives as the group of runners passed by on Friday morning. Even in the darkest hours of early Saturday morning there were many friends and supporters running with head torches to keep Ben and Martyn company. Both finished at 10:00am on Saturday morning, very tired indeed but buoyed by all the generous support. The target for the fundraising effort of £10,000 was surpassed and had reached over £14,000 at the time of writing. 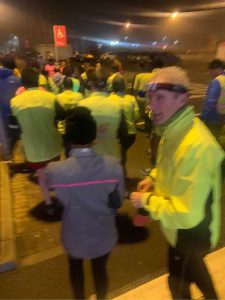 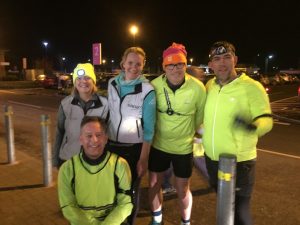 Newmarket Joggers racing over the weekend:

On Sunday, there was a multi-loop 6-hour event at the Suffolk Running Centre at Barrow, near Bury St Edmunds. It was called the Sake Run and was one of a series of Japanese-themed events being held at the Centre on the first weekend of every month. There were choices of 5K (out & back), 10K (1 loop), Half Marathon (2 loops), ¾ Marathon (3 loops), Marathon (4 loops) and Ultra Marathon (5 or 6 loops), to be completed within 6 hours. The course was a mixture of roughly two-thirds road and one-third trail, with some steep ups and downs, totaling over 1500ft of climb for the marathon. Sarah Last (1:19:42) and Gillian Green (1:22:52) both opted for the single loop distance, which was advertised as a 10K but, as they explained before the start, was actually a quarter marathon of 6.55 miles, so not easy for a PB! Chris Aylmer (5:31:34) opted for the marathon distance, which he found a whole lot harder than the flat and even-surfaced Snetterton Race Track marathon in November. The weather was bright sunshine but conditions were particularly difficult along a rutted, muddy, puddly trail section of about one kilometre, which was run twice in each loop in opposite directions. A shot of Japanese sake, a bottle of beer and some welcome sweet and savoury snacks awaited the finishers, not to mention free tea & coffee and comfortable armchairs to relax in afterwards. 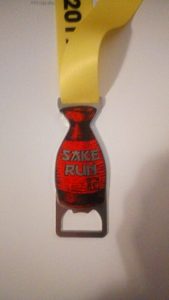 The Sake Run medal, doubling as a bottle opener.