Hannah Parsons, voted Female Improver of the Year at the Newmarket Joggers Christmas Dinner & Awards Night on 7th December, continued in great form at High Lodge on Sunday, in the first of a series of three Thetford Forest 10K winter trail races. Among a total field of 442, Parsons clocked 47:22, finishing 1st of 79 in her FV40 age group and 5th female of 213 overall. Also performing particularly well were Andrew Taylor 45:35, first Jogger home and 13th of 70 in MV40, and Alison McKenzie 58:05, 9th of 42 in FV50+. Other Joggers putting in good efforts were: Sarah Kinston 1:03:49, Svitlana Zinchenko 1:12:49, Sarah Last 1:14:32, Gillian Green 1:18:57 and Caroline McIntosh 1:36:42.  Due to injury, McIntosh diligently walked the route to help maintain fitness for her Tokyo Marathon attempt in the spring.

At the same event as above, in Thetford Forest, Jon Brooker and his young dog Stanley entered the Canicross 10K race, which took place following the standard 10K. It was a first canicross race for both man and dog and they put in a great team effort, finishing in 43:17, which put them 5th of 65 entries and 1st of 8 in the MV50+ age group. Jon’s best standard 10K time so far this year stands at 43:05 in the Bonfire Burn, mostly over road and cycle path, so he achieved a good dog-assisted time along the forest trails, despite a halfway water stop for Stanley.

On the same day, down at Wellington College in Berkshire, Emma Newman took part in the Muddy Welly 10K, which was set in beautiful surroundings but certainly lived up to its name, with glorious mud in abundance. Newman clocked 49:33, doing well to finish 4th of 54 in her Under 40F age group and 17th of 168 female runners overall.

Meanwhile, it was the Woodbridge Suffolk Winter League Cross Country fixture, organised by Woodbridge Shufflers, over a 4.6 mile sandy trail route through the attractive Broxtead Estate in the village of Sutton. The weather was sunny and the course conditions good, apart from lots of puddles to negotiate from all the recent rain. Newmarket Joggers were teamed up with Sudbury Joggers (SJ) as usual and fielded a team of 11 women and 18 men. 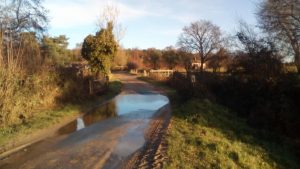 A lovely sunny day for the Woodbridge XC but lots of big puddles along the way. Photo: Chris Aylmer

Jamie Sales was in outstanding form, finishing first Jogger and 8th of over 400 runners, with Mark Hayward not far away in 21st place. Paul Dockerill was third home in 48th position and is showing marked progress. New club member Charles Jones put in a top performance for his MV60 age group, finishing in 94th position. Elke Hausler was first finisher for our women’s team in 163rd overall position, an excellent performance for her FV55 age group. Next came Danielle Jones in 247th followed by Ruth Cowlin (SJ) 288th, the latter also performing very well for FV55.  Kate Warboys is improving rapidly and was next to finish in 318th overall position.

The Newmarket Joggers 10 week Beginners’ Running Course starts on 13th Jan 2020 and entries close on 8th January. Entry £60.00. An optional free year’s membership of Newmarket Joggers (worth £49.00) and a free competition vest in team colours (worth £17.40) are included with the price.