Meanwhile, in Beccles, Suffolk, 3 Joggers took part in the scenic Turkey Trot 10, along undulating, tree-lined country roads passing through small villages. The weather was sunny and fairly mild for December (9°C) but with a stiff breeze. Mark Hayward was in good form and was first to finish in 1:00:21, 7th of 443 runners overall, followed by Paul Dockerill (1:07:26), 10th of 36 in MV40 and Chris Aylmer (1:38:06).  After the Turkey Trot 10 race awards, the winners of the Suffolk Grand Prix were announced. This was a 7 race series in which competitors were judged on their best 5 race results, culminating in the Stowmarket Scenic 7 in November. Jogger Caroline McIntosh was confirmed as 1st place trophy winner in FV65, so congratulations to her on a fine season of running. 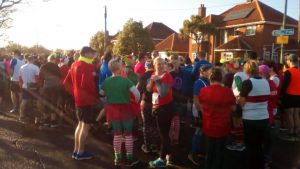 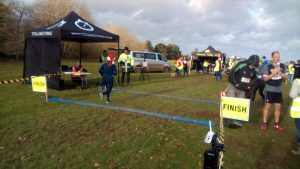 Above top: At the start of the Turkey Trot 10 in bright sunshine, with many in festive dress. Above: One of many Santas finishing the 10 mile race in near perfect conditions for December, apart from a fairly stiff breeze. Photos by Chris Aylmer

On Tuesday evening last week, 40 club members took part in Newmarket Joggers’ monthly Winter 5K Handicap club race, which follows an anticlockwise circular route along pavements in town. According to estimated finishing times, Joggers are time-staggered at the start, with the slowest runners leaving first and the fastest runners last, giving everyone a reasonable chance of finishing near the front, regardless of speed, gender and age. It’s a fun way of encouraging everyone to do their best. Many thanks to our official handicapper Jon Brooker, who tries his best to give everyone a sporting chance of a top three finish each month. This month’s top three were: 1st Kate Warboys (28:06), 2nd Rebecca Oettle (23:27) and 3rd Jonathan Ollington (20:42) who all received a trophy after the race. It was a deserving win for Kate, who has been rediscovering her true form over the last month or two, with application and effort in club runs, track sessions and parkruns.

The handicap race also serves as a valuable winter 5K time trial for all club members, so that everyone can gauge their progress towards personal running goals. On time alone, the three fastest men were Mark Hayward (17:38, course PB!), Sam Sadler (18:26) and Stuart Sowerby (19:42, course PB!) and the three fastest women: Joanna Cole (20:41), Hannah Parsons (21:08, course PB!) and Elke Hausler (22:11, course PB!).  Well done for all those course PBs! Joanna set the course record for women of 18:38 back in the 2011/12 season, which still stands today. After a break from running she is back with the club and already within tantalising sight of a sub-20 time. Good luck to her and well done to all who took part.