No races to report on this week, but Newmarket Joggers had their Christmas ‘Jingle Jog’ last Thursday evening, which means they dressed up in Christmas outfits and visited, en route, some of the local Newmarket hostelries. This year, starting at the Leisure Centre in Exning Rd, they called in at the White Hart, New Wellington, Horseshoes, Golden Lion (Wetherspoon) and finally the Waggon & Horses, solely for hydration purposes of course ;-).

The New Wellington was packed with jolly revellers as the Kitchen Choir from Stetchworth sang half an hour of carols, perfectly timed, by coincidence, to coincide with the Joggers’ visit. The Joggers’ Christmas  fancy dress attire added to the atmosphere and the choir’s rendition of Fairy Tale of New York was particularly well acclaimed, with an Irish drum and squeeze-box accompaniment earning a final encore. Lots of money was also raised for the East Anglian Air Ambulance from generous donations in the pub. There were hopes expressed that this carol singing visit to the New Wellington could be made a planned part of future Jingle Jogs. 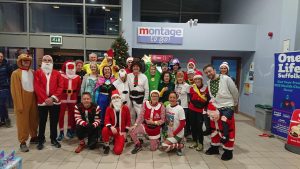 Newmarket Joggers in Christmas fancy dress at the Leisure Centre, before the Jingle Jog. Photo thanks to Emma Reader

One of the club’s favourite races still to come in 2019 is the Ely New Year’s Eve 10K organised by Ely Runners, which normally attracts around 20 to 30 Joggers. This year there is also a new Sublime Cambridge City 10K on Sunday 29th December, starting on Midsummer Common and going along by the river and around Jesus Green, somewhat similar to the Town & Gown 10K course but avoiding the town centre. It has already attracted over 500 entries.

The Suffolk Running Centre at Barrow will be open for business on Saturday 28th, Sunday 29th and Monday 30th December with their Christmas Triple Tipple event. Starting at 8:00am (with entries online or on the day), you can run any distance from 5K to an ultra marathon on any or all three days, within the 6 hour limit. On the 29th there will be a single loop road marathon option. You will get a tipple of spirit at the finish line as well as some nice cakes and savoury snacks to choose from, likely to include homemade sausage rolls with a vegetarian alternative. There is also a comfortable lounge to relax in afterwards with free tea and coffee, ad libitum, for all runners, plus a log burner to warm your feet. The maximum price to pay is £30.00 for a marathon/ultra marathon. There will also be another similar multi-loop 6-hour event on 4th/5th January called the Mount Fuji.

The Suffolk County Cross Country Championships will be taking place at Culford School, near Bury St Edmunds, on Sunday 5th January. Newmarket Joggers has a good number of entries into the senior age categories (aged 20 and over).

For the men’s team, Neil Pollard MV40 (voted Champion Performer of the Year at the Joggers’ 2019 Awards Night earlier this month) and top veterans Neville Clarke MV65 (Grand Prix Men’s Winner and Best Male Veteran Performer of the Year), Paul Holley MV50 and new member Charles Jones MV60, should all go very well on current form. Seniors (20-39) Mark Hayward and Oliver Daykin are sure to be up there with the leaders, while talented new member Jimmy Smith MV40 is definitely a dark horse to look out for and could be challenging the top runners in his age group. Paul Dockerill MV40 and Marc Drury MV45 could be in with a chance of age group trophies. New members Tom Elton and Robert Hawkins should relish the experience and more than hold their own. Experienced campaigners Brian Munns MV55 (Men’s Team Captain), Clive Purbrook MV60, Alan Shand MV60, Jim Withers MV65 (Male Club Member of the Year) and Chris Aylmer MV65 will all be giving it their best shots, some in with top three trophy chances.

For the women’s team, Elke Hausler is bound to fare very well in FV55, as is the experienced Belinda Schofield in FV60. Also in FV55, Jan Holmes (Women’s Team Captain) has the “never say die” attitude and has had a great season. Rebecca Oettle is on the upgrade and should go well in the Senior (20-39) division, while Sianie Painter FV50 (Grand Prix Women’s Winner and Female Club Member of the Year), Nicole Smith FV45 and Angela Barnes (Senior) will be in there fighting hard.