The “Bass Belle” 10 mile race in Bassingbourn, near Royston, was the biggest draw for Newmarket Joggers on Sunday, where 9 of our club competed in the field of 377. This race is named after the wartime US Flying Fortress bomber Memphis Belle, which was stationed at RAF Bassingbourn and completed 25 bombing missions in the 1940s. The race medal shows an image of this famous aircraft, about which two films were made: 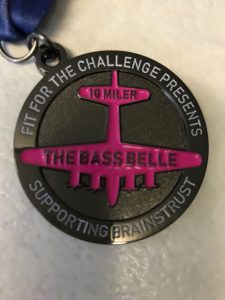 The Bass Belle medal, named after the Memphis Belle wartime Flying Fortress bomber. Thanks to Caroline McIntosh for photo. 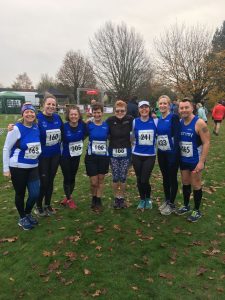 Over on the motor racing circuit at Silverstone, Northamptonshire, Melanie Tindale (1:53:19) clocked her best time this year in the Half Marathon and finished 30th of 235 in her FV40 category, among a field of 2,055.

Meanwhile, it was the Breckland Forest 10K at Santon Downham near Thetford, an off-road trail race attracting 166 runners. Lisa Johnson did well to record 53:59 in her first 10K race this year over difficult terrain, finishing 11th of 93 female participants. She was followed by Rachel Allen (1:39:08).

On Saturday, in Chantry Park, Ipswich, Adam Maltpress enjoyed trying to defend his Ipswich MoRun 5K title, which he won last year. He was narrowly beaten on this occasion into 2nd place of 107 participants in a time of 22:00, finishing 1st of 5 in MV40.