Three Joggers successfully completed the TCS New York City Marathon and did the club proud on Sunday. It was Rebecca Fordham’s first ever marathon and she pulled out all the stops to finish in 4:38:16. Like the other two, she had to dig very deep in the closing stages, with halfway splits of 2:07/2:31. She will have fared very well against her age group rivals but gender and age group results are not currently searchable. New member James (Jimmy) Smith, a veteran of 17 sub 3 hour marathons and sporting a PB of 2:38:06 in the VLM 2017, had sickness and stomach upsets all the week leading up to this race, so he was braced for a stern test of endurance. He still managed a very creditable 3:11:00 with splits of 1:25/1:46, despite feeling progressively more unwell, with sickness during the race. He certainly gave it everything. Jonathan Ollington came home in 4:14:06 with splits of 1:52/2:22 and needed to call up all his reserves in the final few miles. He wasn’t far from his 4:10:49 PB in the Berlin Marathon in 2018, so a fine effort. 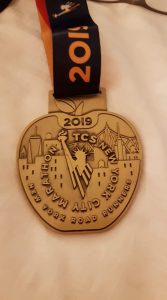 The TCS NYC Marathon Medal. Photo thanks to James Plowman of Newmarket GRL, who also put in a great effort in the race, clocking 4:41:21, despite sickness similar to Jimmy Smith.

In Barrow on Sunday, it was the Kyodo Archer Multi-Loop Half Marathon/Marathon event put on by the Suffolk Running Centre. Lisa Jennings did well to complete the Half Marathon (2 x 6.55 mile loops) in 2:43:21 and the Marathon (4 x loops) in 5:56:58.

Over at Framlingham it was the first Suffolk Winter XC (Cross Country) League fixture of the season, held in the grounds of Framlingham Castle. It also doubled as the final fixture of this year’s Newmarket Joggers Grand Prix, which started last January and comprises 5 Suffolk Winter League cross country events and 5 Kevin Henry League summer 5K events, overlapping two cross country seasons. Ground conditions were extremely difficult with deep, slithery mud and areas of bog all along the trails. However, everyone seemed to enjoy the challenge in the bright sunshine. 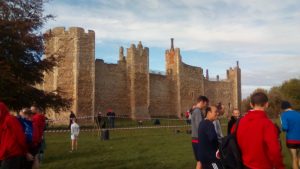 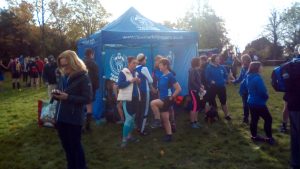 Sianie Painter in centre picture, limbering up for her final Grand Prix event, having done all 9 previous events since January. She is now assured of the Women’s Grand Prix Championship and still has her wild card to play in the Bass Belle 10. Congratulations Sianie! Photo: Chris Aylmer

We can now be certain that Sianie Painter has deservedly won the Women’s Grand Prix Championship for 2019, with her wild card points not needed but still to be added to her tally from the Bass Belle 10 mile race at Bassingbourn on 24th Nov. Second and third will be Caroline McIntosh and Jenny Osbourn. Likewise, Neville Clarke is already assured of the Men’s Grand Prix Championship, with his wild card points from the Hadleigh 10 on 17th Nov still to add to his final tally. Malcolm Osbourn will be second and it will be close between Jeremy Reader and Chris Aylmer for third place. Congratulations to the well-deserved winners Sianie and Neville, and well done all those who represented the club in those races! Special thanks to Jan Holmes, who is currently not 100% fit but was helping out with recording positions as well as supporting the runners. Also, thanks to Sarah Rowland for runner support and photography. The next fixture will be Woodbridge XC on 15th December.