Sarah Boneham took on the extremely hilly Beachey Head Marathon on Saturday, which was run over highly undulating trail paths on the South Downs near Eastbourne. It attracted a field of 2,204 runners and included around 3,700ft of elevation, not too far short of Boneham’s 5,000 feet of ascent over Mount Mulanje in Malawi two weeks ago. She clocked 5:08:19 to finish 38th of 396 in her FV45 age group and 117th of 971 female runners overall; quite an accomplishment over this terrain. Her half marathon splits were exemplary at 2:30/2:38, in what must have been a severely fatiguing race. 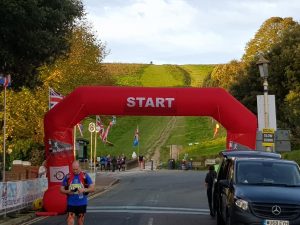 The start of the Beachey Head Marathon, showing the challenging ascent at the beginning, just one of many such ascents and descents. Photo: Courtesy of Trevor Bunch of Haverhill Running Club, who also competed in the race.

Also on Sunday, in ideal, cool, sunny weather, it was the Bedford Autodrome Running Grand Prix, which involved running various numbers of 5K laps around the motor racing track for 5K, 10K, Half Marathon and Marathon, with smaller extra loops as necessary for distance accuracy. Andrew Taylor (44:10) was in good form in the 10K, coming home 4th of 24 in MV45 and 30th of 279 overall, while Chris Aylmer (5:03:55) opted for the Marathon, finishing 109th of 132 overall. 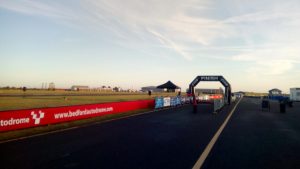 Bedford Autodrome Start/Finish: The Marathon involved a paltry 113 ft of elevation overall, about as opposite as you can get from Beachey Head. Even then, the slight inclines were noticeable! Photo: Chris Aylmer 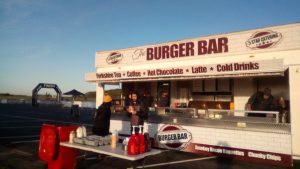 Anyone for refreshment? Not if you took over 5 hours in the Marathon…the shutters were down! There was nice Yorkshire tea to be had before the race though. Photo : Chris Aylmer

In the Redbrik Chesterfield Half Marathon on Sunday 20th Oct, Alan Shand clocked 2:09:46 to finish 12th of 20 in MV60 out of a total field of 799. As far as is known, this was his first half marathon since 2010, in the now-defunct Grunty Fen Half, which staged its final event in 2015. It may possibly be a step on the way to one of his favourite ultra marathon challenges.

Returning to Sunday 27th Oct, Emma Newman sampled the free, monthly TRUST10 trail run/walk 10K around the Blickling Estate near Aylsham in Norfolk. Jan Holmes was also there, trying out a “little joggerette” as she put it, while recovering from a leg injury. No official timing is done for the trail 10K and they leave it up to the participants to bring their own timing devices if they wish. Newman clocked her own unofficial time at 49:45. She was very struck by the beauty of the surroundings. 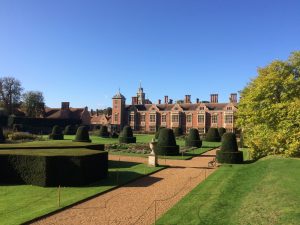