Joggers enjoy a busy weekend of racing despite the rain.

The Abington 10K, one of Newmarket Joggers’ favourite races on the calendar, took place on Sunday along the village roads surrounding Granta Park, near Babraham in Cambridgeshire. This year there were 23 Joggers taking part and several also kindly came to give support.  After a night and early morning of heavy rainfall, the rain thankfully held off for the race and conditions were reasonably good, apart from the many large puddles to negotiate.

For the men, Chris Gay finished 6th of 425 runners overall in 35:42, his best 10K time of the year so far. He was immediately followed by Mark Hayward (36:18), 7th overall, also clocking his best 10K time this year despite a 10 mile warm up beforehand. This extra mileage was added training for his main target, the Chelmsford Marathon in two weeks’ time. Third came 16-year-old Alex Swarbrick (42:04, PB by 4 seconds), who did well to finish 15th of 54 in the MU40 age group, with no junior age groups in this race. 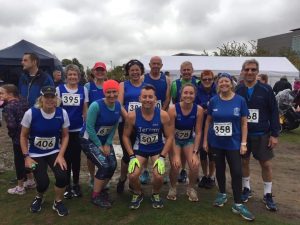 Meanwhile, at the Wimpole Estate between Cambridge and Royston, it was the Hoohaah 10 mile and Half Marathon running events. Emma Newman (1:21:19) had a top run in the 10 mile race, despite soggy, muddy conditions, finishing 4th female from 102 women overall and 4th of 38 in her FU40 age group. In the Half Marathon race, Joe Cormack (2:22:06) and Lisa Johnson (2:22:13) put in brave efforts over very difficult conditions, with squelchy mud and waterlogged areas along the course. 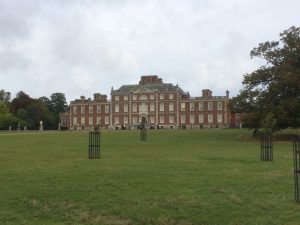 Wimpole Hall, venue of the Wimpole Hoohaah 10 mile and Half Marathon races. Thanks to Emma Newman for photo.

Elsewhere on Sunday, James Thomson (45:06) opted for the Standalone 10K in Letchworth, Hertfordshire, coming 193rd of 1,335 overall and 70th of 217 in his MU40 category, so is recovering well from a foot injury.

Paul Holley (3:10:04) was in determined mood in the very tough Standard Chartered Jersey Marathon on Sunday, which climbs 350ft up from sea level in the first 6 miles. He came home 23rd of 427 overall and 2nd of 61 in his MV50 age group.

Also in marathon action on Sunday was Marc Drury (3:34:06) in the Chester Marathon. He finished 670th of 3,082 finishers and 104th of 385 in MV45, with great negative splits, finishing the last half around 3 minutes quicker than the first.

On Sunday, Newmarket Jogger Sarah Boneham was one of the select team of around 20 participants, who set off with Dame Kelly Holmes on a 7 day expedition across Malawi to raise awareness and funds for alleviation of malnutrition in this country. The trip consists of a 25K run/walk ascent of Mount Mulanje, a 50K cycle ride over the Zomba Plateau and a 20K kayak voyage over Lake Malawi. Next week we will report on Sarah’s adventure and we wish her the best of luck!

Good luck also to Caroline McIntosh, who is travelling to the USA this coming weekend to take part in the Chicago Marathon, alongside Sir Mo Farah. It is forecast to be a bright, sunny morning for the race but quite cool at around 8°C, with a stiff 16 mph breeze. Caroline is hoping to emulate Sarah Boneham and join the exclusive club of those who have completed all six of the officially recognised World Marathon Majors, namely: London, New York City, Berlin, Chicago, Tokyo and Boston. There’s a marvellous medallion as a reward too. After Chicago, Caroline will have just two more marathons to go: Tokyo in 2020 and Boston in 2021. There’s going to be a big Tea Party in Boston ’21 with plenty of cake to go with it…maybe a little bubbly too!