Caroline McIntosh and Ruth Eberhardt successful in their marathon challenges

Caroline McIntosh put in a determined performance in the Chicago Marathon on Sunday, where conditions were cold but sunny for the huge field of 45,742 participants. She clocked 5:32:37, with relatively even splits of 2:39/2:53, finishing 65th of 126 in her FV65 age group, showing just how far her stamina has progressed. She also ran the previous day in the Chicago 5K, clocking 38:20 as a warm up for the big race. McIntosh has already planned the Tokyo Marathon for next year and the Boston Marathon for 2021, to complete the Big Six World Major Marathons. Caroline McIntosh with her medal after the Chicago Marathon. Photo thanks to Caroline.

Meanwhile, Ruth Eberhardt took on the Kielder Marathon in Northumberland, an attractive route all around the ragged edges of Kielder Water, with lots of twists, turns, ups and downs. She showed exemplary control of pace, recording a time of 4:14:32 with very even splits of 2:04/2:10, finishing 250th of 713 overall, 44th of 249 female runners and 13th of 98 in FV40-49.

Also globe-trotting on Sunday was Anna Mayhew, who put in a big effort in the Palma Half Marathon in Majorca, clocking 2:11:37. Conditions were very difficult at up to 25°C in high humidity, so no PBs were on the cards. She finished a creditable 74th of 229 in FV50 in a big field of 3,533.

Over at Peterborough, the Perkins Great Eastern Half Marathon sadly had to be cancelled due to a last-minute security alert, as runners waited in the rain in the starting pens. 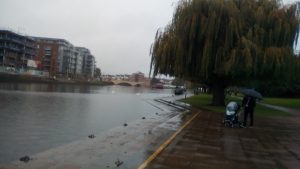 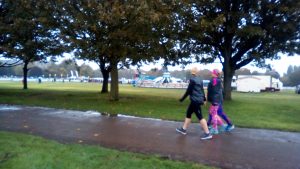 Rainy scenes on the Nene Ebankment in Peterborough, shortly before the half marathon race was cancelled due to a police security alert. Photos: Chris Aylmer

On Saturday, Lisa Jennings (2:51:55) and Gillian Green (3:08:05) did well to complete the King’s Forest Half Marathon, a very gruelling route along muddy, soggy trails through the forest, starting and finishing at West Stow Country Park.

Sarah Boneham has returned safely from her trip across Malawi, having travelled last week in the Orbis Challenge group of 30, led by Dame Kelly Holmes, to help raise funds and awareness of malnutrition in Malawi. The various Orbis Challenge trips across Malawi raise funds for the Open Arms charity, which looks after and educates malnourished children until they can return to their families. From this trip alone, £20,000 was raised, enough to feed 500 children for 2 years. The trip involved a 25K run/jog/walk/crawl up and down Mount Mulanje (5,000ft of climb), a 20K run up and across part of the Zomba Plain (2,000ft of climb) and a relatively level 20K run around Lake Malawi in the stifling heat and humidity. There were also emotional visits to the children being looked after and to their schools and village communities. We will shortly publish a report in Sarah’s own words for you to read and enjoy.