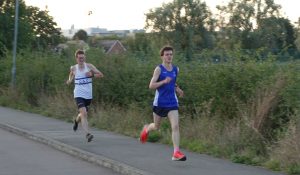 Also on Sunday, up near Thetford, it was the off-road Iceni Half Marathon over rough and uneven trails. Adam Maltpress came home 4th of 66 overall in 1:47:36 with Caroline Mcintosh and Malcolm Osbourn finishing together in 2:51:58. Jenny Osbourn (1:12:49) ran well in the Iceni 10K event. Maltpress needs just one more medal now to complete his target of 40 medals while aged 40. He has until October so no problems anticipated!

On Saturday, Henry Hamilton-Gould (1:08:36) put in a strong run in the Bronsons’ Cotswold Classic 10 mile race in Oxfordshire. 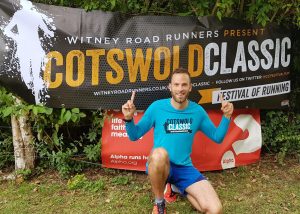 In the final Kevin Henry 5K fixture of the season, hosted by Cambridge & Coleridge AC at the University Sports Ground in Cambridge last Thursday evening, Newmarket Joggers put on a fine show, with a decent turnout and nearly all our fastest runners in action. Full results are now out and the good news is that we did manage to edge up in the men’s competition to =5th position. Unfortunately we remain bottom in the women’s and combined tables. However, the whole team couldn’t have tried harder, with the men’s team actually in 3rd position at Cambridge, despite the lowest male turnout of all the clubs. With this kind of effort and a bigger overall turnout we can surely improve next year.

The first 5 top scoring women for the Joggers were: Hannah Parsons 38th female (22:38),  Emma Newman 43rd (22:52), Hannah Pollard 46th (23:58 YB!), Rebecca Oettle 55th (25:09 YB!) and Jan Holmes 63rd (26:11). Hannah Parsons is having a brilliant 2019 in her first year with the club. It was good to see Hannah Pollard back in action after a long absence of nearly a year, due to injury, while Emma Newman is back to near top form after her injury problems earlier this year. We also welcome back Rebecca Oettle to the club, a great addition to the women’s team. Jan Holmes did a great job to get in the top 5 as FV55. Claire Acklam, also FV55, would also have been among the top female finishers if she hadn’t accidentally and frustratingly taken a wrong turn in the race, easily done by a newcomer on this double-loop course.

In the Pavilion after the race, the Kevin Henry League awards for the most deserving Newmarket Joggers went to Claire Acklam for the women’s team and Marc Drury for the men’s team, both very keen and committed club members. Both have run in all the KH fixtures over the spring and summer and have been impeccably consistent in times and performances; a great asset to the club.

A big thank you to all those who represented Newmarket Joggers in the final Kevin Henry fixture of the season.