On Friday, in Italy near Venice, Newmarket Jogger Elke Hausler put in a great run to win the bronze medal in the W55 (Women 55-59) 5000m track event in the European Masters Athletics Championships. She clocked 21:27.01, which was also a new track PB for her by a small margin. This earned her an age grade of 82.44%. The gold went to another top veteran GB runner Clare Elms (19:00.30), with Swede Karin Schon (19:17.17) claiming silver. Hausler also ran in the W55 Road 10K event on Sunday under very hot conditions of 26° C, finishing 6th in 45:28. The previous Sunday, she finished 9th in the W55 4K cross country race and just missed out on a team GB gold medal as 4th W55 GB runner home. 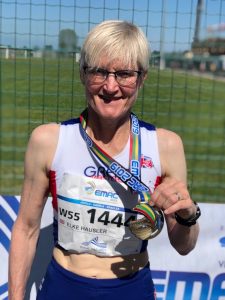 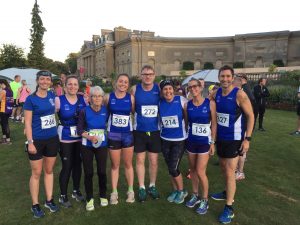 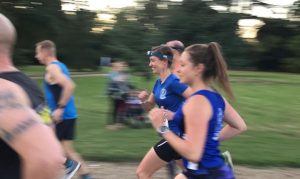 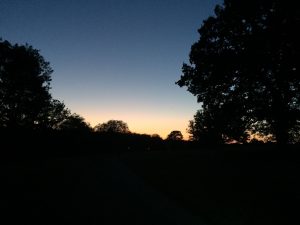 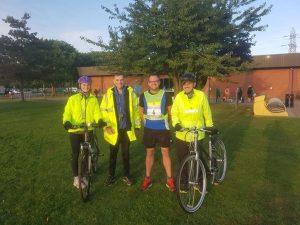 The Round Norfolk Relay got off to a bright, sunny start in King’s Lynn on Saturday morning, with 59 teams from local clubs competing and it stayed sunny the whole day. There were 17 stages of varying distances between 5 miles and 20 miles, the earlier coastal stages mainly off-road, with the route going clockwise around the North Norfolk coast and turning inland near Great Yarmouth, roughly following the Norfolk/Suffolk border back to King’s Lynn. It went on all day and through the night, with the start times staggered so that all teams finished around the same time on Sunday morning in King’s Lynn.

Newmarket Joggers began at 7:30am on Saturday and the team took 25h:6m:19s to complete the 198 mile distance. Full results are now available (see below) and the Joggers’ finishing time puts them 20th overall of the 59 teams competing, just one position lower than last year. In our Open Class (no restrictions on the make-up of the team), we came 7th of 22 teams.

The fastest team was Riverside Runners from St Neots in 20:40:10, the first time they have competed in the Round Norfolk Relay, so a great debut for them. All the more impressive, Riverside Runners competed in Club Class, which meant they had to include at least five women and six veteran runners (FV35+ or MV40+) in the team of seventeen.  Newmarket Joggers entered as Open Class, meaning, in theory, that we could have included just our 17 fastest runners in the club, all men if necessary. As it was, there were 4 women in our team and 12 veterans in all. Surprisingly, we would have finished lower down at 8th of 24 had we recruited another female runner and entered in Club Class, so Jim Withers had it all sussed out beforehand when he decided on the team!

All in all, it was a great team experience and team achievement for everyone, including the vital support crew, who followed behind all the road runners on bicycle during the day and in a van by night, ensuring safety for all. 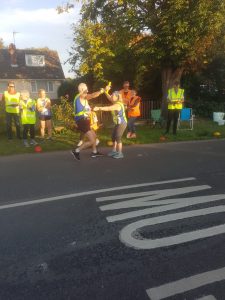 Alan Shand sort of hands over the baton to Jan Holmes at Lessingham (Stage 8), with a dance thrown in for good measure. Photo Jan Holmes