Chris Gay was in fine form in the Sandringham 10K on Sunday. He finished 1st of 150 runners overall, clocking his best 10K time this year of 36:46.

Also on Sunday, 3 Joggers competed in the Thompson 10K Run, Thompson being a picturesque Breckland village near Thetford. In this trail race along pathways and bridleways, Andrew Taylor was first Jogger home in 49:21, finishing 28th of 107 overall, followed by Clive Purbrook (53:53) and Belinda Schofield (59:46). Schofield was 13th female of 47 in her best 10K time this year.

In Barrow on Saturday and Sunday, it was the Suffolk Running Centre’s first staging of its multi-loop Japanese-themed Marathon Series. Each loop was a very hilly quarter of a marathon (6.55 miles) and runners could do as many loops as they wanted within the 6 hour limit, with two loops qualifying for the special medals. In the Karate Kid event on Saturday, Sarah Boneham managed 3 loops (19.65 miles) in 3:04:23, Caroline Mcintosh 3 loops in 4:20:52 and Lisa Jennings 1 loop in 1:29:27. On Sunday in the Cobra Kai event, Ruth Eberhardt completed 3 loops in 3:11:32 and Sarah Boneham 1 loop in 1:04:16. The next event in the series will be the Kyodo Archer on Sunday 3rd November. 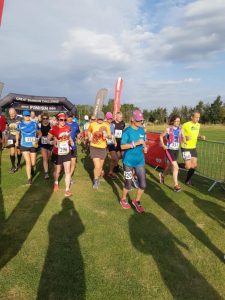 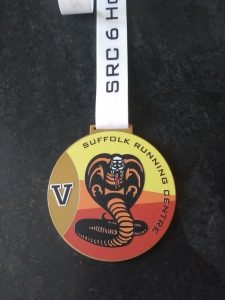 Above Left: Ruth Eberhardt and Sarah Boneham were among the starters of the Cobra Kai event. Above Right: The Bling. Photos by Ruth Eberhardt.

On Saturday, Richard Groom took part in the Norfolk Coastal Trail Marathon, over testing beach and trail sections, finishing 42nd of 145 in 4:43:53, his first marathon this year.

On Friday evening at 7:45pm, Thetford Forest was lit up by 750 runners with head and body torches in the Forest Of Light Run. Entrants were invited to run as many 3K laps as they wished within approximately 2 hours, followed by a party afterwards at High Lodge. Lisa Jennings completed 3 laps in 1:06:29 and Sarah Last 2 laps in 41:45. The most anybody managed was 10 laps or 30K in 2:01:00; not bad through a forest in the dark.

On Saturday, in glorious sunshine, Jan Holmes joined thousands of others in Hyde Park and took part in the Swim Serpentine event, which supports Children with Cancer UK. There were distances from half a mile to the “Super 6” mile category to choose from and swimmers had to queue for the start of each successive wave. Jan opted for 2 miles (2 laps of The Serpentine) and finished 41st of 103 in her FV55-59 category in a time of 1:19:54. All good fun and very good training for her triathlon events. 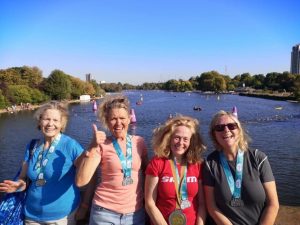