Veteran Newmarket Jogger Neville Clarke came up trumps in the Littleport 10K on Sunday, winning the MV65 age group trophy by over 3 minutes in a time of 42:20, his best 10K time since 2013. It’s been a great season for Clarke, who has found it hard to put a foot wrong with strong performances at all distances up to half marathon. He has been running since a young lad and a member of the Joggers for around 25 years. Interestingly, he never wears any kind of timing device, just goes by effort and feel. 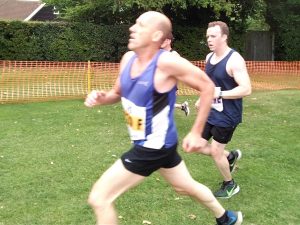 Female veteran FV65 Caroline Mcintosh is also having a tremendous season with one PB after another. She completed the Lee Valley 10 Fest 10M race on Sunday, near Waltham Abbey in Essex, in a new PB time of 1:51:49, only 2 weeks after dipping below 30 minutes for the first time in a 5K. She has also set new 5M and 10K PBs recently. She’ll be going for a marathon PB at Chicago in October and who would bet against her? Her current mark is 5:24:01 in the Berlin Marathon last September. 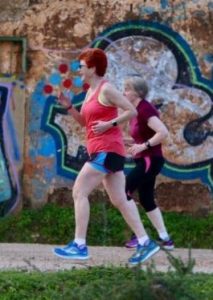 Also on Sunday, Clive Purbrook completed the 11K Nelson Knee-Knobbler at Winterton-On-Sea in a time of 1:04:33. This event is a challenging run along beach and over sand dunes on the Norfolk coast. He was 40th of 85 overall and 2nd MV60.  On Friday evening, Andrew Taylor (47:02) put in a good effort in very warm conditions to finish 248th of 1,292 runners in the Ipswich Twilight 10K.

Mark Hayward was all set for his Outlaw ‘Ironman’ Triathlon on Sunday at Nottingham Holme Pierrepont Watersports Centre, after months of intensive training. Unfortunately, torrential rain and flash floods caused the cancellation of the bike stage and the competition was reduced to a Swim/Run event. Nevertheless, Hayward put in a great effort to clock 2:56:34 in the marathon stage, finishing 31st of 925 overall and 7th of 112 in his MV35 age group. In the marathon stage alone, he was in 14th position overall and 3rd in his age group.

Jan Holmes is a budding triathlete and entered the London Triathlon on Saturday at the ExCel Centre, Royal Victoria Dock. She was part of an Olympic distance triathlon relay team of three (Swim 1500m/Bike 40km/Run 10km) and chose the 1500m swim stage as her contribution. She clocked 34:27 at a very decent pace of 1:53/100yds. Her Team Zebra finished 107th of 144 in a time of 2:59:18. These relay events are ideal as an introduction to triathlons, without the stress of competing in all three stages.