Maisey Snaith chosen to represent GB in U20 European Championships

We are proud to report that 18 year old Maisey Snaith, 2nd claim Newmarket Jogger, is among 69 athletes chosen to represent Great Britain in the U20 European Athletics Championships in Boras, Sweden, July 18-21. She is one of 6 picked for the 4 x 400m women’s relay team. She represents Cambridge & Coleridge as 1st claim but also trains with Joggers’ top coach Mick Graham in Newmarket and has done so from an early age, along with her brother Ben. She has been specialising in 400m running over the past year or so and was runner up in the Senior Girls 400m at the prestigious English Schools’ Championships last year. We’ll be rooting for her in the European Championships.She’s off to university in the United states in August, where there should be excellent training facilities. For more info see link: 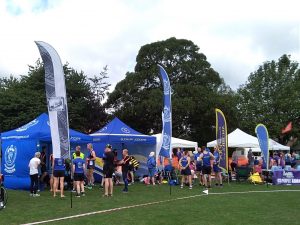 The two Joggers’ Female Open teams came home in 4:07:58 and 4:18:36, placing 10th and 12th of 13 in their category, while the Joggers’ Male Open team clocked 2:47:45, finishing 12th of 33 teams. The Male Vet One and Vet Two teams finished in 2:59:24 and 3:25:42 respectively. Greg Davis was going very well in the first 10K for his Male Vet One team but unfortunately had to slow right down due to an injury and eventually retire after 3 laps, so the next man (Marc Drury) did an extra lap in his 5K leg, to make up for the lost distance. As a result, neither of them has a true time or distance for comparison. At first the team was judged as being a lap short and placed last of 11, behind our Male Vet Two team, who were in 10th place. However, the good news is they have now been reinstated in 9th place of 11 teams. 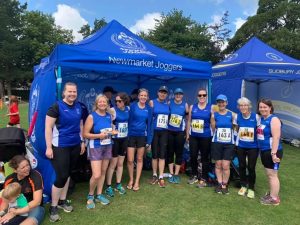 The Ekiden women’s team members, thanks to Jan Holmes 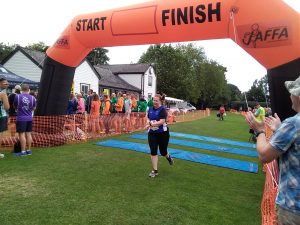 It was a new PB for Ellie Bithell who moves up from Silver to Gold club standard and also a PB for Claire Acklam who is already in Platinum standard and placed second in the table. Pauline Green recorded a year best 5K time and moves up from Gold to Platinum standard, which she also attained in 2018.  Among many excellent performances for the other Joggers, Caroline Mcintosh (29:44) put in a huge effort to go below 30 minutes for the first time and there were year best or PB times for Angela Barnes (28:29), Daphne Hurley (33:15) and Sharon Woodroofe (33:16). For the men, Marc Drury (20:06), Jeremy Reader (23:18), Jim Withers (25:27) and Alan Thornhill (29:29) all achieved year best 5K times.

In the league tables, the Joggers are =5th in the men’s competition, 6th in the women’s competition and 6th in the combined results. So basically =last, last and last! Our main problem is a low turnout compared with most of the other clubs. Remember that every runner outside the top 5 men or women in each club picks up one valuable point. We managed just 37 runners compared with 48 from C&C, 58 from Ely, 89 from Haverhill and an incredible 113 from the hosts Saffron Striders, who no doubt had a three-line whip in operation! No wonder there seemed to be Striders everywhere! In this fixture they came top of the women’s table and fourth in the men’s as a result of this massive increase in attendance, whereas they are more usually bottom or near bottom with a similar turnout to ourselves. Full respect for the motivation and tactical prowess of the Striders’ team in their home fixture.