The fifth in the series of six Friday 5 mile races took place at Stowmarket on Friday evening in perfect conditions over a gently undulating road route, which started and finished in Haughley Park. Five Newmarket Joggers took part: Brian Munns (37:27), Jim Withers (43:55), Sianie Painter (47:12), Chris Aylmer (50:58) and Caroline Mcintosh (51:00). Mcintosh was on song and took almost a minute off her all-time 5 mile PB, only a week after her previous PB over the same distance. This earned her 65.5% age grade and takes her into Gold club standard, a feat she also accomplished last year. Munns clocked his best time of the series so far. 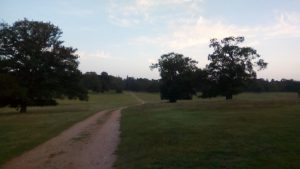 On Sunday, Adam Maltpress also took part in the Run Orwell 5K in Cambridgeshire, where he clocked 22:41 and finished an impressive 4th of 101 overall. Meanwhile, Andrew Taylor competed in the Abbey 10K in Ramsey near Peterborough, recording a time of 48:59 and finishing 110th of 395 overall. He’s recovering well from a foot injury.

On Saturday morning at Milton Country Park, Newmarket Joggers staged a “takeover” of Cambridge parkrun, i.e. they filled the majority of the volunteer roles from run director and results processor to time-keeping, barcode scanning and marshalling. 471 participants turned out for the parkrun on a lovely sunny morning, already 20°C but not nearly as hot as it became later in the day. There were 27 Joggers helping as volunteers and also 13 more who took part in the run. It was an enjoyable team achievement by the club at one of their favourite parkrun destinations, which began life in 2010 and, for some years, was the only local parkrun within reach. Read Ruth Eberhardt’s excellent Cambridge parkrun report at: 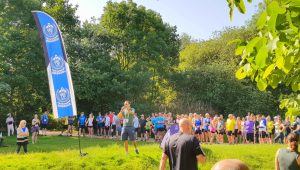 We’re all geared up for the Marcus Gynn Newmarket 10K this coming Sunday 7th July at 10:00am, which starts in the playing fields at The Ellesmere Centre, Stetchworth CB8 9TS. There are also junior races beforehand to enter on the day. There are still some places remaining in the senior race, so please snap these up on our website: www.newmarketjoggers.co.uk