On Sunday, Neil Pollard (1:17:08) put in a great effort in the Southend Half Marathon to finish 8th of 1,949 overall and 3rd of 384 in the MV40 category. He found the last few miles quite challenging but dug in deep to finish high in the order with fairly even splits of 37/40 minutes. Paul Dockerill (1:39:11) also ran well to finish 75th in the same age category. 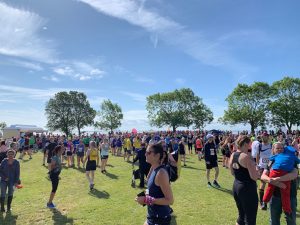 Southend Half Marathon start, thanks to Neil for photo.

Clive Purbrook (50:38) returned for another crack at the Sutton Beast 10K near Ely, finishing a very decent 93rd of 319 overall, while Caroline Mcintosh enjoyed her run in the Race For Life 10K at Nowton Park in Bury St Edmunds, where times were not recorded.

Over in northwestern USA, globe-trotting Henry-Hamilton-Gould (3:21:17) tackled the very hilly Rock ‘n’ Roll Seattle Marathon, entailing some 1,700 ft of climb. His first half split was 1:34 but his legs were very tired in the last few miles. He still managed to finish in a very good time on this beast of a course. Conditions were sunny but reasonably cool early on, with a 6:30am start.

Henry Hamilton at the finish of the Rock ‘n’ Roll Seattle Marathon. Thanks to Henry for photo.

On Friday evening, three Joggers competed in the Lotus Race Track 10K near Wymondham. Adam Maltpress was first home in 47:12, 36th of 132 overall, closely followed by Andrew Taylor (47:59) and Clive Purbrook (48:56). According to their Garmins, the distance appeared to be over by around 0.4K, so these were good efforts.

Also on Friday evening it was the second of the Friday 5 mile Series of races, hosted on this occasion by Framlingham Flyers. Neville Clarke (34:57) put in his usual superlative effort, winning the trophy for top MV65 by over 6 minutes. Interesting that he doesn’t wear any kind of GPS device and goes only by effort and feel. Kate Warboys (48:56) is improving rapidly and took 3 minutes off her previous week’s time, much better than she had targeted. Others to finish were Brian Munns (37:49), Jim Withers (43:05) and Chris Aylmer (46:37).

On Thursday evening, Newmarket Joggers hosted the third of the Kevin Henry 5K League races, which took place on Newmarket Heath, just behind the Rowley Mile racecourse. This league is currently open to 6 local running clubs, including Newmarket Joggers, Ely Runners, Saffron (Walden) Striders, Haverhill RC and two from Cambridge: Cambridge & Coleridge (C&C) and Cambridge Triathlon Club (CTC). There were 399 runners in all, including 44 Joggers and some invited participants from Royston Runners and Histon & Impington Runners, who are hoping to join the league in the future, possibly next year. 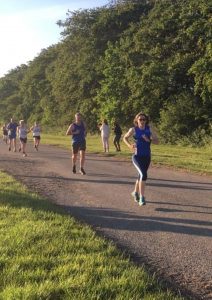 Ruth Eberhardt demonstrating perfect running form in the Kevin Henry on Newmarket Heath to achieve her best 5K time this year. Thanks to Ruth for photo.

Thanks to race director Jan Holmes and to all the marshals and other volunteers from Newmarket Joggers who helped to make this Kevin Henry event so enjoyable and successful.

After three races, Newmarket Joggers stands 5th of 6 in the men’s and combined tables and equal 5th in the women’s table, so room for a smidgen of improvement. Maximum turnout will be needed in the final three fixtures to pick up those vital single point contributions scored by all runners outside of the top five women and men in each club. C&C is in the lead in the women’s and combined tables and equal first with CTC in the men’s.