Four Newmarket Joggers were successful in the Edinburgh Marathon on Sunday, in which a total of 7,302 runners were competing. Jackie Hall (4:42:25) was first home, coming 1,391st of 2,532 female finishers in her second marathon to date, following on from her debut in the 2016 VLM. Next came Sandra Jaina (4:42:46) and Lisa Winnington (4:46:22), who were both running in their first ever marathons and put in very competent and composed efforts, refusing to hit any walls. Lisa was accompanied and paced by our experienced marathon campaigner Sarah Boneham (4:46:23).

Meanwhile down in Merseyside, Danielle Jones recorded 1:56:36 in the Liverpool Rock ‘n’ Roll Half Marathon in her first ever attempt at the distance, finishing a very creditable 448th of 4,923 female runners in a total field of 8,738 participants. 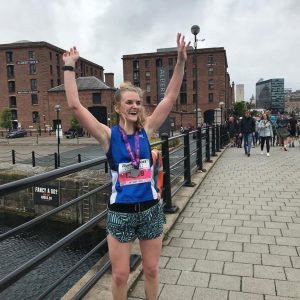 Danielle Jones celebrates after finishing the Liverpool Rock ‘n’ Roll Half Marathon in her Merseyside homeland.

On Bank Holiday Monday, four Joggers took on the Vitality London 10K along with Mo Farah, in a huge field of 19,465 participants. Henry Hamilton-Gould (39:28) had a great run and beat his previous PB (set in 2016) by 30 seconds, finishing 945th overall. Also achieving a PB was the ever-improving FV65 Caroline Mcintosh (1:05:50), perhaps relishing the speed of the road surface after a succession of leg-sapping trail races. Richard Jones MV55 (48:08) accompanied his wife Alix and finished 145th of 798 in his age group, with Chris Aylmer MV65 (58:17) following on safely under the hour after a tentative start. 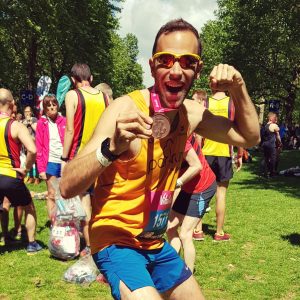 Above left, Henry basks in a mega deck chair in Green Park.  Above right, with his Vitality London 10K medal.

Message from race organiser Jim Withers: Please note, the Marcus Gynn Newmarket 10K will be starting at 10:00am from the Ellesmere Centre in Stetchworth CB8 9TS on Sunday 7th July. It’s a lovely undulating course, going along country roads and passing through a stud farm. We welcome entries at www.newmarketjoggers.co.uk  There will also be a junior fun run at 9.30am. We are fortunate to have two of Newmarket’s best known local businesses sponsoring the race this year – Tattersalls and Musk’s.