Last Thursday, 155 runners competed in the annual Newmarket Heath Race (incorporating the Stable & Stud Challenge), which took place in the training grounds between Bury Road and Moulton Road. It is a challenging route, estimated at 5.4K, going through woods and climbing Long Hill before the gradual descent from Bury Hill to the finish. Rossdales were the winners of the Stable & Stud Challenge, which comprised mixed teams of three, including at least one female runner in each team. Individual winners of the race were, for the men: Jack Stamp (18:34) of IRT (International Racehorse Transport) Runners and for the women: Katie King (22:48) of St Edmund Pacers. 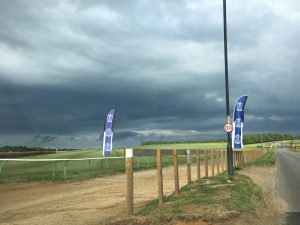 A surreal view from the start of the Newmarket Heath Race, by James Thomson. The looming clouds threatened but the weather stayed fine.

Rounding up the Weekend News. On Sunday, Iain Perry (53:32) performed well in the Fen Drayton 10K, a lovely course around lakes in the nature reserve. On the same day, Adam Maltpress clocked 20:00 and came 165th of 2,055 overall in the Milton Keynes MK Rocket 5K, which was an all-time PB for him according to our records. This must be one of the biggest 5K races in the UK. The very next day, May Day Monday, Maltpress also ran in the MK Half Marathon event, clocking 1:44:08 and finishing 387th in a total field of 2,589. He was obviously keen to get two of the very attractive MK medals (see photo below) towards his quest for 40 race medals while aged 40! Among 1,838 runners in the MK Marathon, Chris Aylmer (4:49:23) achieved a PB by 10 minutes in his 6th marathon race to date, in weather which was ideal for marathon running at around 10-11°C, with hazy cloud and a cool, gentle breeze. 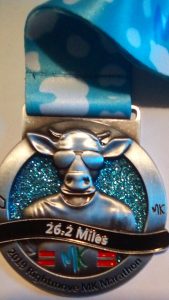 At Croxton, near Thetford, the Breckland 10K attracted 3 Joggers: Paul Dockerill (39:18), Clive Purbrook (48:12) and Alan Thornhill (1:01:56). It was an all time PB for Dockerill by 12 seconds and the best 10K time this year by Purbrook. Down in Essex, 16-year-old Alex Swarbrick (42:11) and MV65 Miles Johnson (time?) put in good efforts in the Ashdon 10K. There is an error in Johnson’s chip time, which has been given as two minutes faster than the winner’s time, but a correction will no doubt be forthcoming. Also in Essex, it was the Witham May Day 10 mile race on Monday. Henry Hamilton-Gould (1:05:18) put in a top effort and achieved a PB by 2 minutes, finishing 21st of 236 overall. See photo below:

Finally, on Sunday it was the First-Sunday-of-the-Month 5K and 10K races at the Great Barrow Challenge HQ in the village of Barrow, near Bury St Edmunds. Joe Cormack was able to run in both races, as the 10K starts an hour after the 5K. He clocked 23:54 in the 5K and 50:21 in the 10K, finishing 4th of 19 and 4th of 13 respectively. These times were close to his best this year.