On Sunday, Newmarket Jogger Paul Holley (36:55) put in a superlative performance in the Alton Water 10K, near Ipswich, finishing 2nd of 540 runners overall and 1st of 77 in his MV50 age group by over 6 minutes. Holley has just recently returned from a long work stint in the heat of Dubai and is clearly relishing the chance to test himself in some races in our relatively cool spring weather. 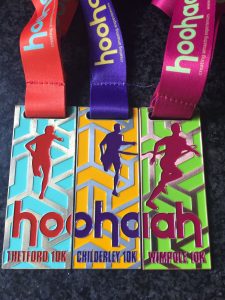 The Hoohaah Medal completed, thanks to Sarah Kinston

Elsewhere on the same day, Joe Cormack (1:58:24) came home in safely under 2 hours, among a massive field of 17,475 in the Hackney Half Marathon in London. Nearer HQ, Craig Ladley achieved a PB of 45:50 and was 95th of 1,418 in the Colchester Zoo Stampede 10K. On Saturday, Neil Williamson (3:43:39) took on the tough, scenic and very hilly White Peak Marathon in the Peak District and was pleased with his performance in his first marathon for 4 years, finishing 41st of 120 overall. Mark Hayward competed in the Outlaw Triathlon Half event at Holme Pierrepont in Nottingham, consisting of a 1.2 mile swim, 56 mile bike ride and 13.1 mile run. He came 20th of 147 in his MV35 age group in a total time of 4:57:03 and 6th in the half marathon run stage (1:26:09), his strongest discipline. 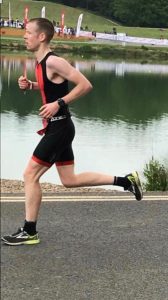 Perfect running form at ~6:30/mile pace, demonstrated by Mark Hayward in the Outlaw Triathlon Half Marathon.