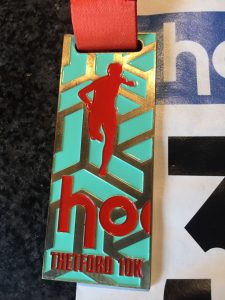 On the same day, 3 Joggers joined Mo Farah and over 13,000 others in the Vitality Big Half in London, where conditions were a little windy to say the least and not ideal for PBs.  New club member Guy Watts (1:38:39) was first Jogger to finish, from Jonathan Ollington (1:48:23) and Caroline McIntosh (2:32:37).

Up by the River Mersey, in wet and squally weather, Mandy Davis (1:48:03) completed the Liverpool 10 mile race as a warm up for her attempt at the London Landmarks HM on 24th March. Meanwhile, globe trotter Henry Hamilton-Gould (1:34:46) took on the Surrey Half Marathon at a controlled pace, preparing for his half marathon in Cyprus on 17th March. Good luck to both of them in their upcoming races.

Much nearer home, Adam Maltpress and Richard Groom ran in the Cambridge Boundary Run, organised by Cambridge University Hare and Hounds, which is mainly an off-road route over the half and full marathon distances. Official results are not yet out but Adam clocked a provisional time of 1:55:08 in the half marathon race, which brings his total of medals to 20 out of his target of 40, while aged 40.

Fritton Lake XC, the fifth of six Suffolk Winter XC (Cross Country) League fixtures, went ahead on Sunday morning, in a chill wind and over a soggy, muddy course, following heavy rain which fortunately began to ease off shortly before the start. Just 12 Newmarket Joggers and 2 Sudbury Joggers made up our team, the venue being some 70 miles distant by road. Greg Davis was first NJ home in 34th position of over 300 runners overall, followed by Neville Clarke in 97th, while Isabella Soro was first female Jogger home in 102nd overall position from Belinda Schofield in 246th. Other finishers were Jeremy Reader 158th; Clive Purbrook 163rd; Brian Munns 184th; Malcolm Osbourn 209th; Sianie Painter 258th; Chris Aylmer 271st; Alan Thornhill 282nd and Jenny Osbourn 312th. It looks like Greg, MV55, and Neville, MV65, will retain their leads in the individual age group categories of the league competition going into the final fixture at Haverhill on March 24th. Malcolm is almost certain to finish top of his MV70+ category and deservedly so after a year of continuous improvement in every department of his running.