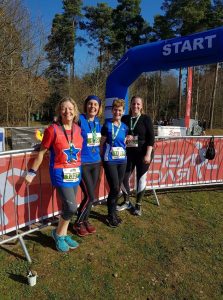 Down in Hertfordshire on the same day, Henry Hamilton-Gould competed in the Baldock Beast Half Marathon, coming home 40th of 372 runners in a time of 1:36:07, his first half marathon this year. He was running at a controlled pace, hoping to save his best effort for the club’s favourite race, the Cambridge Half Marathon on March 3rd, for which no less than 64 Newmarket Joggers are registered to run.

Also on Sunday, in lovely sunshine at the Beyton School Campus near Bury St Edmunds, it was the Tarpley 10 and 20 mile events, named in commemoration of St Edmund Pacer Bert Tarpley. Clive Purbrook completed the 10 mile race in 1:24:25, close to his best time earlier this year, while Paul Dockerill (2:33:11) was well up with the pace in the 20 mile event. Also running in the 20 were Caroline McIntosh (3:59:28), who did well to duck under 4 hours in her first competitive 20 mile race, and Chris Aylmer (3:28:45), a few seconds from a PB. After the Tarpley race awards, the Suffolk Grand Prix age category prizes for 2018 were presented. Malcolm Osbourn and Chris Aylmer both received runner-up trophies for MV70+ and MV65 respectively.